Immune checkpoint inhibitors for esophageal cancer: are we moving in the right direction?

Advanced, metastatic esophageal cancer is a disease traditionally treated with systemic chemotherapy, an approach that is largely palliative with limited durable benefit. Recently, several trials have demonstrated improved outcomes in this patient population using immune checkpoint inhibitors. Long and durable responses have been seen at least in a subset of patients, however, identifying patients who would benefit from immunotherapy has been challenging.

Currently, esophageal cancer is the seventh most common malignancy in the world and ranks as the sixth leading cause of cancer-related death. In 2018, approximately 572,000 new cases were diagnosed worldwide and 509,000 deaths occurred from this disease, highlighting the aggressive nature of this disease (1). There is significant geographic variation in incidence and histopathology. Squamous cell carcinoma (SCC) represents over 90% of esophageal cancer cases in Asia, South America and the Middle East, while in the United States and Western countries, adenocarcinoma, the second most common histologic subtype, is more frequently diagnosed. Although exact etiologies for these subtypes have yet to be elucidated, SCC has been linked to heavy drinking, smoking, betel quid chewing, and consumption of nitrosamines, whereas obesity and gastroesophageal reflux disease are the primary risk factors for adenocarcinoma. Despite significant declines in the incidence of SCC, adenocarcinoma is expected to rise dramatically over the next few decades (2).

Treatment for metastatic esophageal cancer has been slow to evolve and has historically focused on selecting two- or three-drug combination chemotherapy regimens irrespective of a patient’s histologic subtype. Two-drug regimens are preferred due to lower toxicity whereas three-drug regimens are often reserved for those with good performance status. The current standard of care 1st line therapy involves combining a fluoropyrimidine (fluorouracil or capecitabine) with either cisplatin or oxaliplatin, regimens largely supported by data extrapolated from metastatic gastric cancer trials (3,4). A substantial minority (~18%) of patients with esophageal cancer express HER2/neu, a transmembrane receptor responsible for activation of signal transduction pathways involved in cell proliferation (5). Such patients derive significant clinical benefit from trastuzumab, an anti-HER2/neu monoclonal antibody, when combined with a chemotherapy backbone (6). Benefits from other HER-2/neu targeted agents have been disappointing. Selecting a 2nd line regimen is largely dependent on prior therapy and performance status: single agent chemotherapy, combination ramucirumab and paclitaxel for adenocarcinoma, and for the select few patients with tumors that are characterized by high microsatellite instability or deficiency in mismatch repair enzymes, the immune checkpoint inhibitor pembrolizumab can be used (7-12). Few patients receive treatment beyond 2nd line therapy, often due to significant decline in performance status and the lack of clinical benefit. In general, even with improvements in modern systemic therapies, fewer than 5% of patients with esophageal cancer survive beyond 5 years (13).

Recent advances in molecular profiling, immunohistochemical identification of novel targets, and an improved understanding of the esophageal tumor immune microenvironment have shown esophageal cancers to be quite heterogeneous and highlight the need for more sophisticated approaches to treatment selection. Recently, inroads have been made with immunotherapy for the treatment of several tumors including upper gastrointestinal malignancies. The phase II KEYNOTE-059 trial demonstrated the efficacy of single agent pembrolizumab in patients with gastric and gastroesophageal junction (GEJ) adenocarcinoma who had progressed on at least two lines of prior therapy (Table 1). The authors reported an overall response rate (ORR) of 11.6% and median duration of response (mDOR) of 8.4 months. Interestingly, responses were seen in patients whom tumors did not express programmed death-ligand 1 (PD-L1), defined as tumor PD-L1 expression <1%, with response rates of 15.5% and 6.4% in patients with PD-L1+ and PD-L1- tumors, respectively (14). Based on these findings pembrolizumab was granted accelerated approval in metastatic PD-L1+ gastric and GEJ adenocarcinoma in 2017. Shortly thereafter, the results of the KEYNOTE-028 were published; Patients with PD-L1+ (defined as tumor PD-L1 expression >1%), SCC, or adenocarcinoma of the esophagus or GEJ who had progressed on standard therapy were treated with pembrolizumab 10 mg/kg every 2 weeks for up to 2 years or until confirmed disease progression or intolerable toxicity (21). ORR was 30% and the mDOR was 15 months. 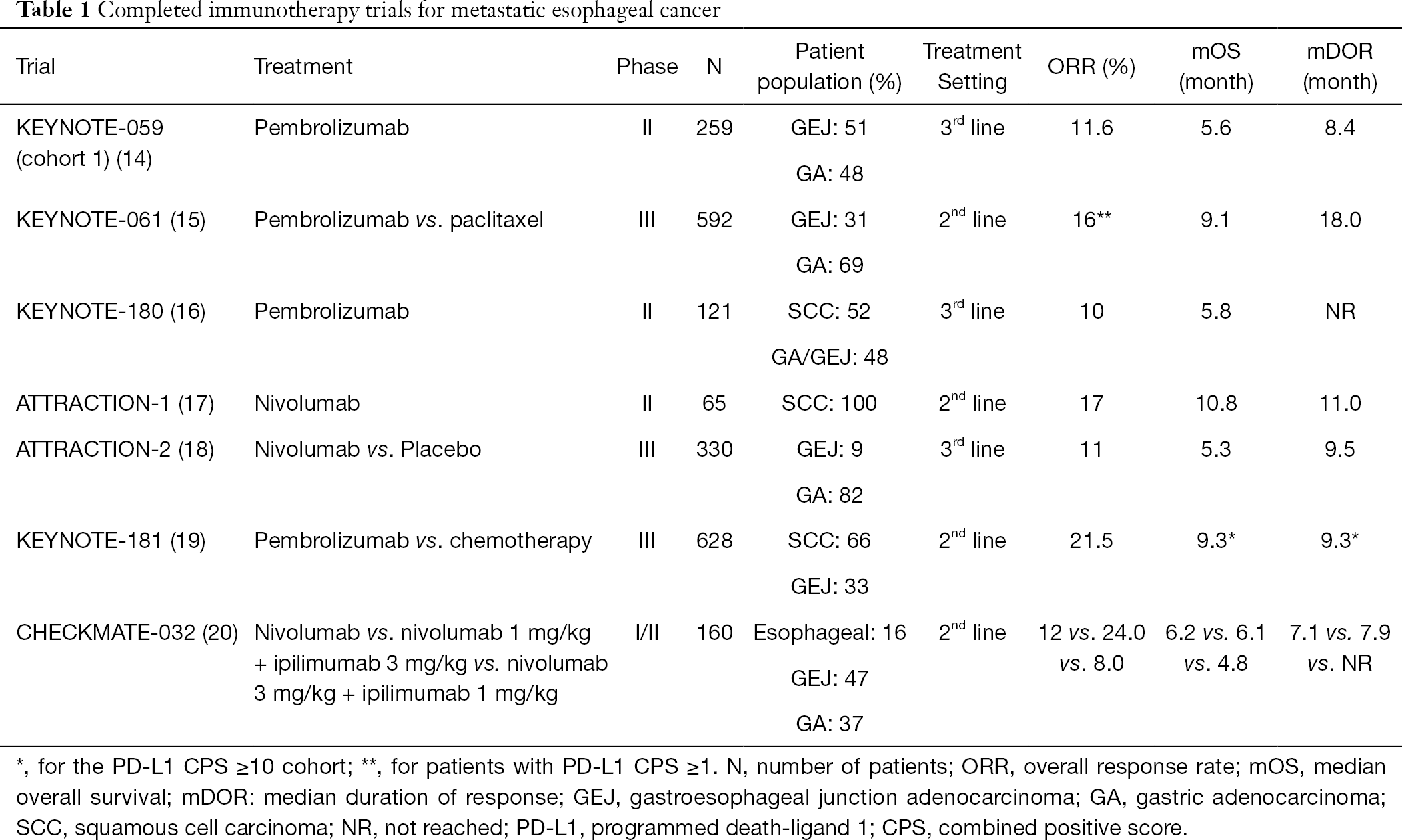 In an effort to further define the role of immune check inhibitors in esophageal cancer, the open-label, phase 2 KEYNOTE-180 study was conducted and the results of this study were recently published (16). The study enrolled a total of 121 patients with histologically confirmed advanced, metastatic esophageal SCC or adenocarcinoma who had previously received and progressed on two lines of therapy. Patients were treated with pembrolizumab 200 mg every 3 weeks for up to two years or until disease progression or unacceptable toxicity. Unlike the KEYNOTE-028 study described above, PD-L1-positivity was not a required inclusion criterion. All pretreatment tissue samples were tested and PD-L1-positivity was defined as a combined positive score (CPS) of 10 or more. The primary endpoint was ORR. Secondary endpoints included duration of response, progression-free survival (PFS), and overall survival (OS).

This was the largest trial to date to examine the role of pembrolizumab as monotherapy in the 3rd line setting for esophageal cancer, an area of unmet need. Although the population of patients included in this study were heavily pretreated, the authors described a modest ORR of approximately 10%. In addition, in those achieving a response, the duration of response was compelling, with 2 patients achieving responses lasting over year. A total of 58 (47.9%) of patients had PD-L1+ tumors but only 8 (13.8%) of these were noted to have an objective response. Despite enriching for higher PD-L1 expression with a CPS cut-off of 10%, this ORR was significantly lower than that described in the KEYNOTE-028 trial which demonstrated an ORR of 30%. Possible explanations for these discrepancies include a different dosing schema as well as a different set of criteria used to define PD-L1 positivity. Furthermore, the KEYNOTE-028 trial also included patients with GEJ adenocarcinoma whereas the KEYNOTE-180 did not. These data suggest that PD-L1 alone may not be a sufficient predictive biomarker in this setting for esophageal cancer and further investigation is needed.

Interestingly, more patients with SCC seemed to respond to treatment with pembrolizumab compared to those with adenocarcinoma a finding also noted in a similarly designed study with single agent nivolumab (22). Due to the limited sample sizes in these studies, however, it is difficult to draw definitive conclusions between likelihood of response and histology and further confirmation in larger randomized clinical trials is required. Within a month of the publication of the KEYNOTE-180 trial results, data from the phase III KEYNOTE-181 study were presented. This randomized control trial compared pembrolizumab (200 mg every 3 weeks for up to 2 years) to investigator’s choice of chemotherapy (paclitaxel, docetaxel, or irinotecan) for 2nd line therapy in 628 patients with advanced or metastatic SCC and adenocarcinoma of the esophagus or Siewert type I adenocarcinoma of the GEJ (19). Two-thirds of the population had SCC and one-third had adenocarcinoma. The three co-primary endpoints were OS in the intent-to-treat population, the SCC subgroup (n=401), and the subgroup with a CPS ≥10 (n=222).

In conclusion, recently generated data has convincingly demonstrated a role for immunotherapy as a 2nd and 3rd line treatment option for esophageal cancer. Nevertheless, several questions remain unanswered. First, is PD-L1 the optimal predictive biomarker for this this disease? Although patients with PD-L1+ disease are more likely to respond to immunotherapy, response rates are still below 20% and interestingly, a substantial number of patients with PD-L1- tumors may also respond. Second, defining PD-L1 positive disease is still evolving, with various studies using cut off CPS scores of 1%, 10% or even as high as 50%. Although this enriches for a population of patients more likely to respond, it excludes a minority of patients who may derive significant, durable responses. Third, what is the optimal setting to introduce immunotherapy for the treatment of metastatic esophageal cancer? Currently, Pembrolizumab is approved in the United States for 3rd line treatment after failure of two chemotherapy regimens and Nivolumab is approved in Japan for the 2nd line treatment after failing conventional therapy. However, based on the data discussed above, the use of immunotherapy in the 2nd line is justifiable in patients with PD-L1 positive tumors and patients with microsatellite instability. Finally, in several diseases there is emerging preclinical and clinical data supporting the hypothesis that immunotherapy may in fact be more effective if applied to earlier in a patient’s disease course and in combination with chemotherapy (23,24). In a press release regarding KEYNOTE-062 trial evaluating pembrolizumab, as monotherapy and in combination with chemotherapy for the 1st line treatment of advanced gastric or GEJ adenocarcinoma, it was reported that in the monotherapy arm of the study, pembrolizumab demonstrated noninferiority to chemotherapy for OS of patients whose tumors expressed PD-L1 (CPS ≥1). The combination arm of pembrolizumab plus chemotherapy was not found to be superior for OS (CPS ≥1 or CPS ≥10) or PFS (CPS ≥1) compared with chemotherapy alone. Results will be presented during an oral session at the 55th Annual Meeting of the American Society of Clinical Oncology (ASCO). This results further question the role of these agents in the treatment of esophageal cancer.