From 2007 to 2011, the adjuvant sunitinib in high-risk renal cell carcinoma (RCC) after nephrectomy (S-TRAC) investigators conducted a phase 3, randomized, placebo-controlled trial with primary results published in 2016 (1). Patients with completely resected, high-risk RCC defined based on pathologic stage received either adjuvant sunitinib or placebo for a maximum of 1 year. Disease-free survival (DFS) was 6.8 years [95% confidence interval (CI): 5.8 to not reached] in patients receiving adjuvant sunitinib compared to 5.6 years (95% CI: 3.8–6.6) in patients receiving placebo (hazard ratio 0.76; 95% CI: 0.59–0.98; P=0.03). While this trial met its primary end point for DFS and ultimately led to FDA approval for sunitinib in the adjuvant setting, a benefit in overall survival (OS) was not seen. Similarly, subsequent trials have been unable to demonstrate an OS benefit for adjuvant systemic therapy following surgery for high risk RCC (2-5). A recent meta-analysis of adjuvant targeted therapies (including data from S-TRAC) found no DFS, cancer-specific survival (CSS), or OS benefits in patients receiving adjuvant treatment (6). Since up to 40% of patients with stage III/IV non-metastatic RCC are not cured with surgery alone (7-9), systemic therapies that can improve CSS and OS are eagerly sought.

Despite mostly negative results from large, randomized, phase III trials, secondary and subgroup analyses of select patients demonstrate a faint signal that may be promising (3-5). Similar to the findings in S-TRAC, improved DFS was observed for a subset of patients in the axitinib versus placebo as an adjuvant treatment of RCC (ATLAS) trial (4). In this trial, patients were randomized to receive either axitinib or placebo. Although the primary endpoint of DFS as determined by an independent review committee was not met, a significant DFS benefit was found in the highest-risk subgroup of patients. These patients were defined as having pT3 with Fuhrman Grade ≥3 or pT4 and/or N+, any T, any Fuhrman Grade disease, and a pre-specified P value ≤0.1352 was used to define statistical significance. In this subgroup of patients, investigator review found a DFS risk reduction of 36% (HR 0.641; 95% CI: 0.468–0.879, P=0.0051), while an independent review committee found a DFS risk reduction of 27% (HR 0.735; 95% CI: 0.525–1.028, P=0.0704). Taken together, these results suggest the possibility that patient selection rather than the therapeutic intervention itself may drive improved outcomes.

Biomarker-guided therapies have been used to target malignancies in other organ systems. Breast cancers now ubiquitously undergo molecular testing, the results of which determine the need for adjuvant therapy and have demonstrated improved survival outcomes in the adjuvant setting (10). Estrogen receptor positivity has been utilized since the 1970s for prognosticative and therapeutic input, with the selective estrogen receptor modulator tamoxifen demonstrating mortality benefits at both short-term and long-term follow-up (11). Detection of human epidermal growth factor receptor 2 (HER2) overexpression has also yielded improved progression and survival outcomes in patients treated with HER2-targeted therapies, which include trastuzumab, lapatinib, pertuzumab, or ado-trastuzumab emtansine (12).

The NCCN guidelines for colon cancer include tumor genotyping for KRAS, NRAS, BRAF, and microsatellite instability (MSI) or mismatch repair (MMR) (13). Mutations in KRAS and NRAS are predictive of a lack of response to treatment with cetuximab and panitumumab, allowing for these drugs (and their associated side effects) to be avoided in mutation-positive patients (14-16). Similarly, patients found to have the BRAF-V600E mutation are unlikely to respond to panitumumab or cetuximab, and alternative therapy should therefore be sought in patients with this mutation (17-19). Finally, patients with a deficient MMR phenotype have been shown to have a favorable prognosis following adjuvant FOLFOX therapy (20). Thus, breast and colon cancer provide a model by which patient selection for adjuvant therapies in RCC can be shaped.

The first study to demonstrate that biomarkers may help improve patient selection for adjuvant therapies in RCC was the adjuvant weekly girentuximab following nephrectomy for high-risk RCC (ARISER) trial (5). In ARISER, patients with high-risk RCC were randomized to receive either adjuvant girentuximab or placebo. Girentuximab is a monoclonal antibody against carbonic anhydrase IX (CAIX), a cell surface glycoprotein that is expressed in 95% of clear cell RCC tumors, but is not expressed by non-cancerous renal tissue (5,21). While no benefits in DFS (HR 0.97; 95% CI: 0.79–1.18) or OS (HR 0.99; 95% CI: 0.74–1.32) were observed in the intervention arm, a subgroup analysis was performed to explore the relationship between tumor CAIX expression and patient response to treatment. In this analysis, patients whose tumors demonstrated higher expression of CAIX experienced an improvement in DFS that approached statistical significance (HR 0.75; 95% CI: 0.55–1.04; P=0.08). These results blended support to the concept that certain biomarkers can predict improved response to treatment in RCC and may be a more refined instrument with which to select patients for adjuvant therapies compared to pathologic stage alone.

Increased expression of vascular endothelial growth factor (VEGF) is a well-established driver of tumorigenesis in RCC (22-25). VEGF binds the transmembrane receptors VEGFR-1 and VEGFR-2, through which it can affect a number of cell signaling pathways promoting tumor angiogenesis and survival (26). Targeted therapies for RCC work by blocking VEGF receptors, thereby potentiating the effects of VEGF overexpression in RCC. In patients with metastatic RCC, toxicity/need for dose-reduction (27,28), OS (29-32), progression-free survival (27,29-33), and response to treatment (29,30,33) have all been associated with various single nucleotide polymorphisms (SNPs), which are variations in single base pairs in the genome. These positive results evaluating SNP-guided prediction of treatment efficacy in metastatic RCC form the basis for exploring their use to more appropriately select patients for adjuvant therapy. 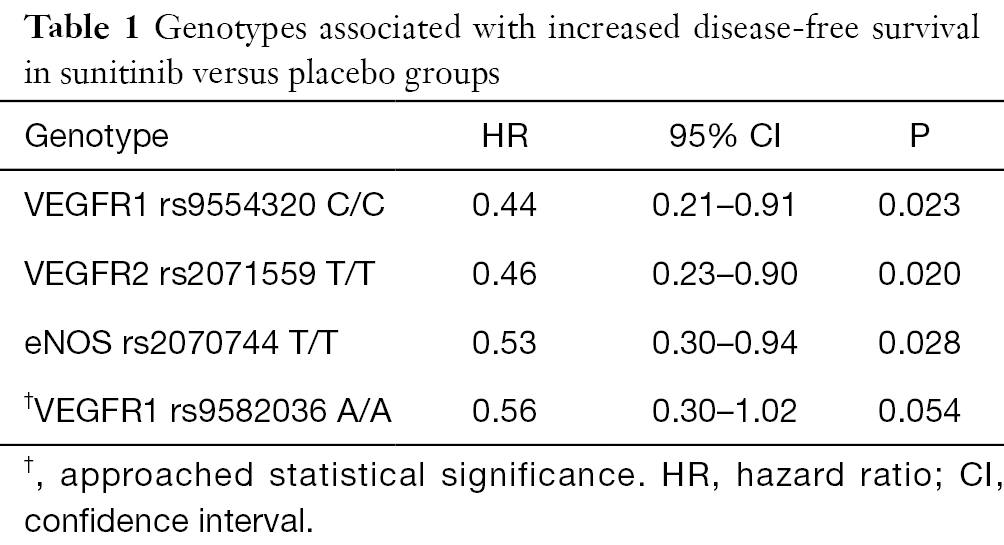 These findings should be considered hypothesis-generating for several reasons. Of 615 patients randomized in S-TRAC, fewer than half (286/615, 47%) had blood samples drawn for genotyping (34). Additionally, patients who were genotyped tended to be white (90.2% vs. 78.4%, P<0.001), older (age ≥65: 31.8% vs. 20.4%, P=0.002), and were considered to be higher-risk (University of California Los Angeles Integrated Staging System group T3 low: 30.1% vs. 42.9%, P=0.009) when compared to those who were not genotyped (34). Any of these between-group differences could have accounted for observed differences in outcomes. Therefore, these conclusions should be considered associative rather than causative. Nonetheless, it is plausible that the longer DFS associated with certain subgroups of patients who received sunitinib may have been due to DNA-level differences compared to non-responders. These findings require confirmation in prospective, randomized, placebo-controlled trials. 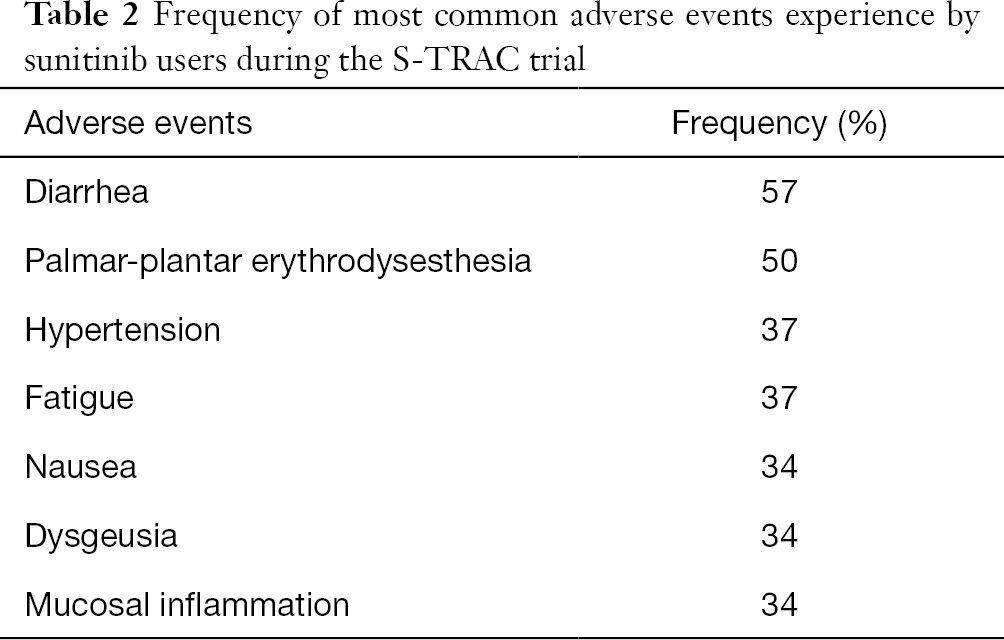 To date, adjuvant trials in RCC have been disappointing. However, it is possible that pathologic stage is simply too blunt an instrument to accurately select patients for adjuvant therapies. Therapy for any disease is not truly optimized until patients can be reliably stratified based on who is most likely to benefit from, suffer from, or be unaffected by any given intervention. While prospective studies are clearly warranted, George and colleagues provide provocative data suggesting that SNP analysis may help us better define the population most likely to benefit from adjuvant treatment in RCC.