In 2017, lung cancer was one of the leading causes of cancer-related mortality in the United States, accounting for up to 26% cases (1). The National Lung Screening Trial Research Team reported that the use of low-dose computed tomography (LDCT) as a screening tool to detect early-stage lung cancer could reduce mortality up to 20% among smokers or ex-smokers (2). Compared with chest radiography and conventional CT, LDCT provided more detailed information about lung disease with less radiation dose. Of note, patients experiencing symptoms such as cough, hemoptysis, dyspnea, or chest pain and high-risk patients, such as smokers or those with a cancer history, are more likely to undergo CT scanning. Reportedly, the incidental pulmonary nodules could be classified as benign and malignant, such as lung cancer, metastases, carcinoid tumor, infectious granuloma, or benign tumor (3). If nodules exhibit suspicious image features or are indeterminate, nonsurgical biopsy or excision could be performed for the tissue diagnosis.

Surgical excision is the gold standard for diagnosis among the management options for cancer, also providing other benefits, such as diagnosis, tumor staging, lymph node sampling, and treatment within a single operative procedure. Additionally, minimally invasive thoracic surgery (MITS), including video- or robotic-assisted thoracoscopic surgery, offers advantages such as faster recovery time, shorter hospitalization, reduced postoperative pain, and smaller chest wall incision, making it a favorite option for surgeons compared with open thoracotomy (4-6). Nevertheless, MITS has some limitations. Tsai et al. reported the challenges in recognizing small, subsolid, or deeply-seated pulmonary nodules during video-assisted thoracoscopic surgery (VATS) (7); these pulmonary nodules were either invisible or impalpable. Previously, several localization methods have been developed to enhance the accuracy of resection; however, those methods with different localized material or modality exhibited variable complications, advantages, or drawbacks (8). For instance, the dislodgement rate was about 2.4–6.9% at the hookwire localization. Hence, this study aims to assess the safety and efficacy of the preoperative computed tomography (CT)-guided localization with patent blue V dye. 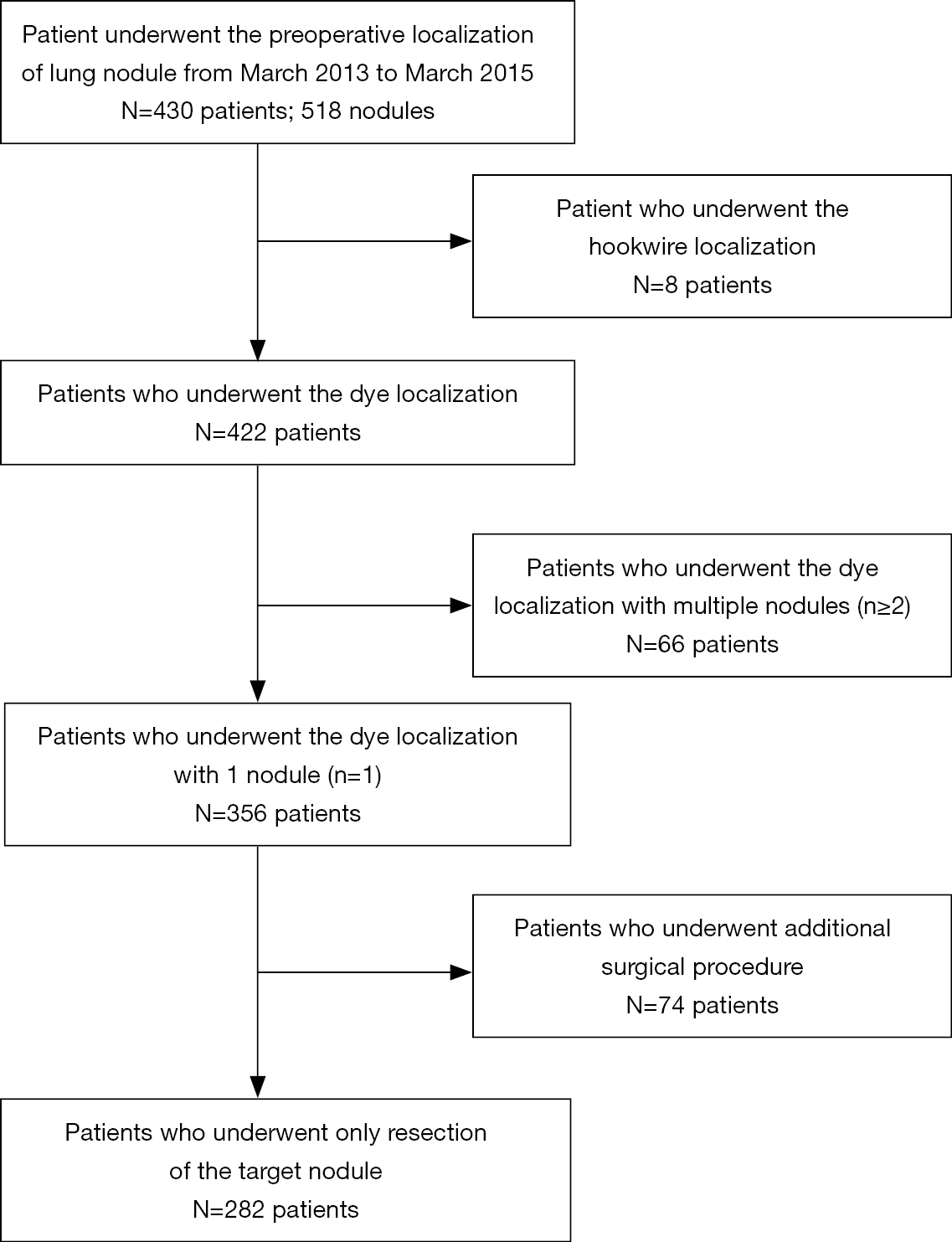 In this study, dye localization was performed (Figure 2) under a 4- or 16-slice CT (HiSpeed CT/i or GE LightSpeed; GE Healthcare, Milwaukee, WI, USA). After confirming the location of the lung nodule with a surgeon, we planned a needle tract as short as possible to avoid transverse through a large vessel, bulla, or interlobar fissure. A 22-gage, 15-cm Chiba needle (PTC needle, Hakko, Nagano, Japan) was inserted into the target nodule under CT scan after sterilization and local anesthesia with 2% lidocaine. Next, 0.1–0.2 mL dye (patent blue V 2.5%; Guerbet, Aulnay-sous-Bois, France) was administered through a needle into the target lesion. If the lesion was far from the pleura, the dye was injected multiple times along the tract between the nodule and the subpleural region. We arranged the final CT to validate the result of the dye localization and postprocedural complication, including pneumothorax or hemorrhage. Then, patients were transferred to the operating room/ward for VATS, where a surgeon could resect the lesion along the trace of dye (Figure 3).

Figure 2 A 52-year-old female who had pure ground-glass nodule at the right middle lobe underwent the preoperative localization. The final pathological report confirmed adenocarcinoma. (A) The initial computed tomography (CT) revealed a ground-glass nodule at the right middle lobe of the lung; (B) the Chiba needle is inserted into or adjacent to the lung lesion; (C) after dye injection and removing the Chiba needle, the CT scan revealed the marked route of the localization. CT, computed tomography.

Figure 3 The thoracoscopic view of the same patient from Figure 2. The location of patent blue V dye is clearly visible at the lung surface during wedge resection.

To simplify our comparison, we excluded patients with >1 nodule to preoperative localization or those who underwent additional procedure during operation from our study (Figure 1). We analyzed the image features of lung nodules, including the nodule size, attenuation, and distance to the nearest visceral pleural or fissure surface. Furthermore, we analyzed the details of surgery and localization, including the distance of needle transversing the lungs, procedural time, postprocedural complication, and postoperative hospital stay.

Table 1 summarizes the patients’ demographics. The mean age of our study sample was 56.6±11.6 (range, 19–85) years, with female preponderance (male/female, 95/187). Of all, 33 patients were either smokers or ex-smokers, and 83 had a cancer history. Furthermore, 38 patients had undergone lung surgery in the past, and CT revealed visible emphysema in 4 patients. 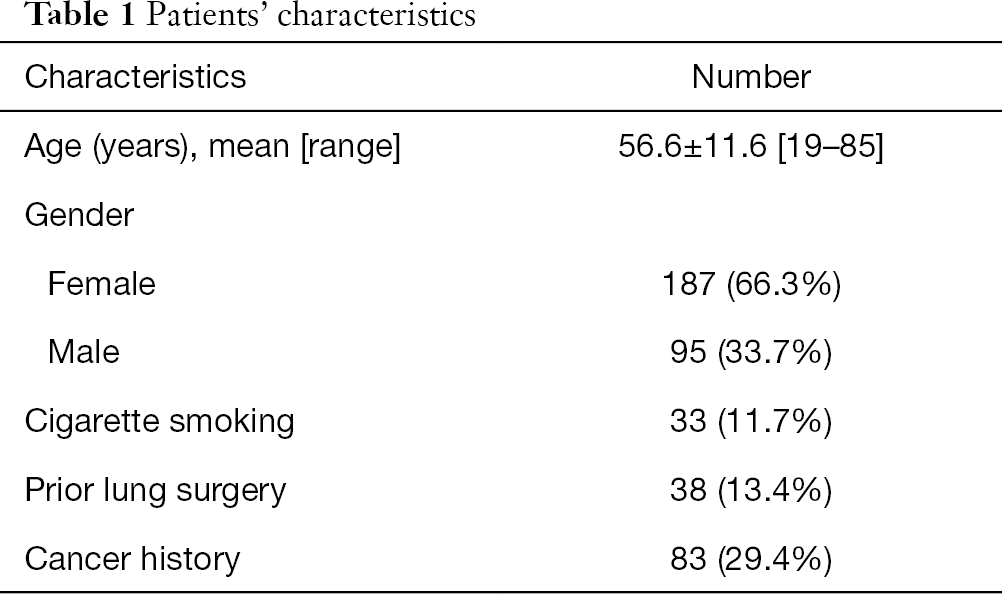 Table 2 presents the image features of nodules. The mean size of nodules was 0.9±0.5 (range, 0.3–3.2) cm. There were 67 solid nodules, 60 subsolid nodules, 151 pure ground-glass nodule, and 4 nodules with cavitation. In 41 patients, the nodule depth from the visceral pleural or interlobar fissure surface was >2 cm. 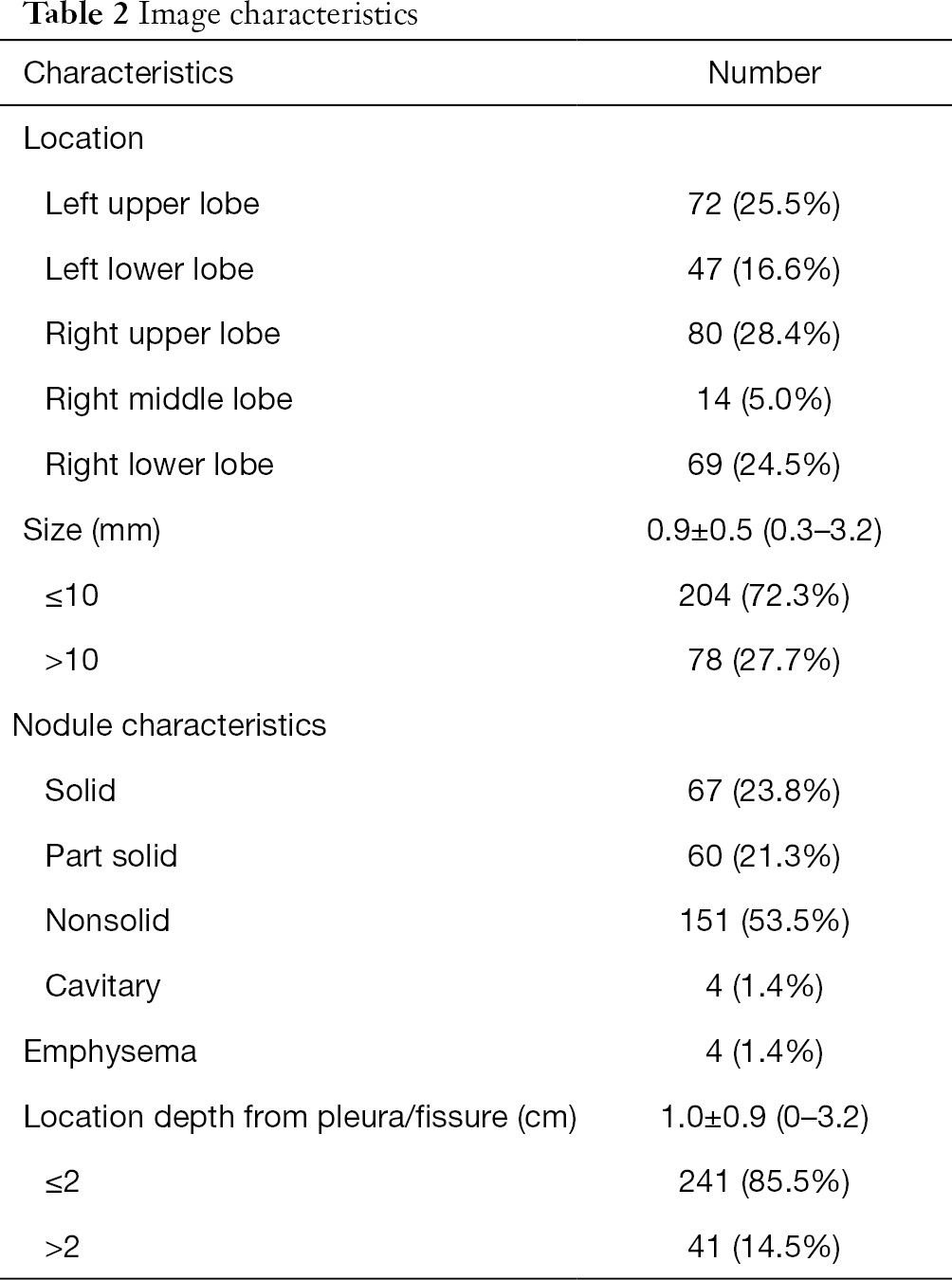 Table 3 presents each parameter of localization such as the depth of the needle transversing the lungs, procedural time, and complication rate. The mean depth of the needle transversing the lungs was 1.9±1.2 cm. Overall, 15 patients had a deep needle penetrating route with >4 cm length. The mean localization duration was 24 (range, 3–70) min. Except for two cases with the poor or fail dye localization, our localization procedures were performed successfully with minimal or acceptable complications; these two cases underwent successful resection after cautious palpation. In addition, four cases used two Chiba needles during the localization because the tip of the first needle was far away from the target lesion, whereas three cases reported the transfissural route of localization. In our localization, the leading complications were pneumothorax (48 patients, 17%) and mild pulmonary hemorrhage (51 patients, 18%); all were asymptomatic under the oxygen supplement through a nasal cannula. Other rare complications were subcutaneous hematoma or subcutaneous emphysema, which spontaneously resolved without treatment. 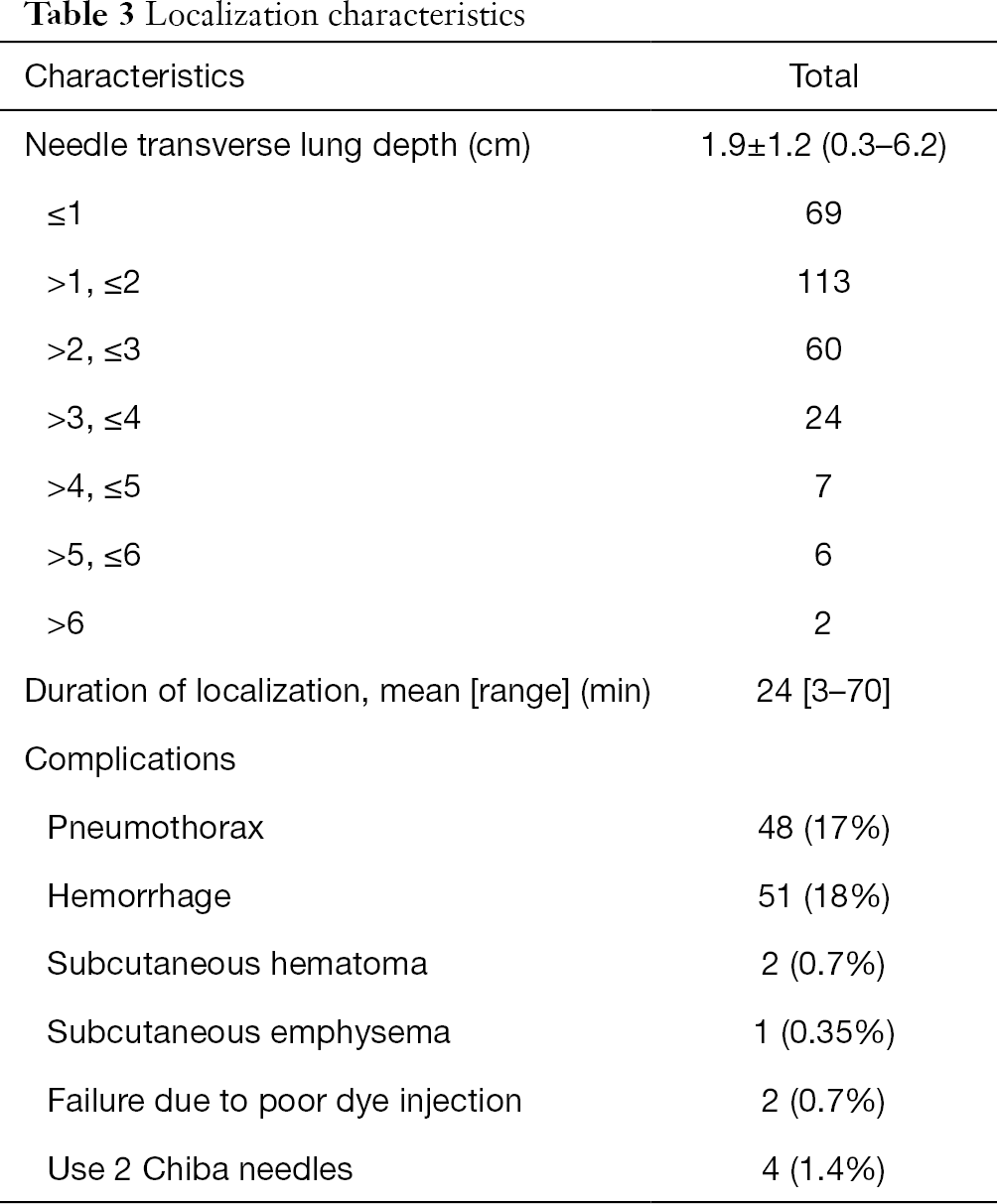 Table 4 presents the type of surgery and pathological results. In this study, most patients underwent wedge resection (78.3%) and segmentectomy (12.8%); the remaining patients received lobectomy after intraoperative frozen-proven malignancy (25 patients, 8.9%). The mean duration of lung operation was 105 (range, 35–325) min. In addition, the leading pathology in this study was lung cancer and premalignant lesions (74.1%). The ratio of the benign nodule was about 19.1%. Residual nodules include metastases or lymphoma. 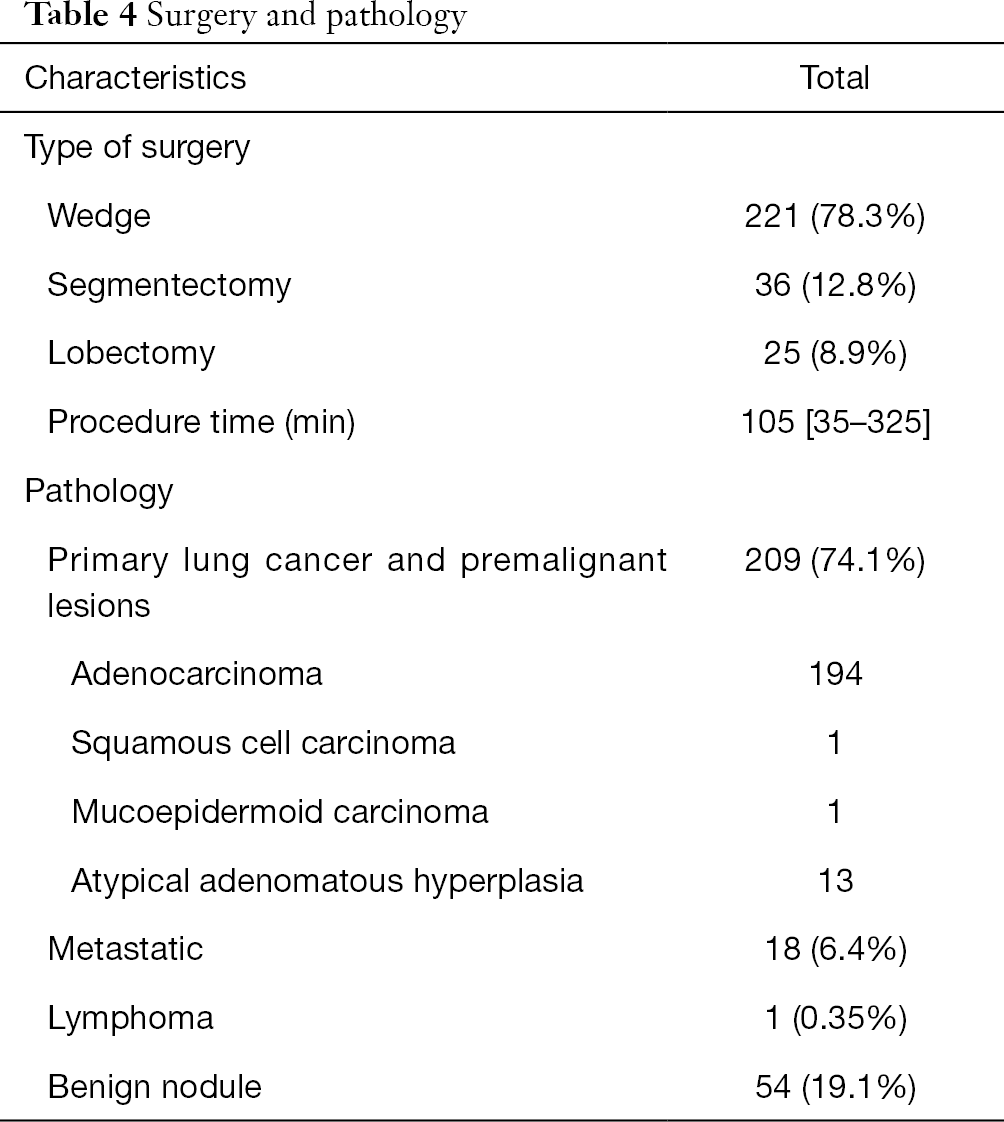 Table 5 summarizes the details of patients’ outcomes. Of note, three patients reported air leak and one experienced chylothorax, receiving pleurodesis postoperatively. Additionally, one patient had empyema, receiving decortication and empiric antibiotics during readmission; one patient had postoperative left-side weakness, and the brain magnetic resonance imaging (MRI) revealed with right middle cerebral artery infarction. We noted no definite image evidence of embolic infarction in the brain MRI. Notably, one patient died due to the left ventricular rupture, probably because of acute myocardial infarction. 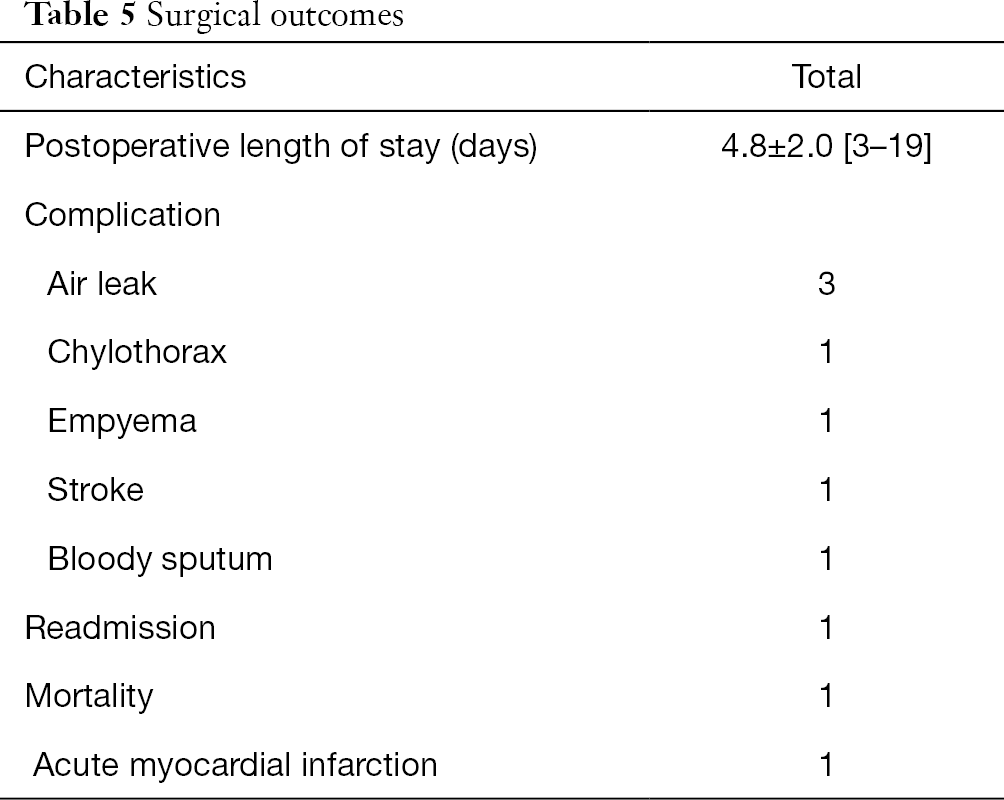 VATS is a minimally invasive procedure, which provides short recovery time and one-step diagnosis and treatment; hence, most surgeons preferred this procedure for treating indeterminate lung nodules. However, a study has reported small subsolid characteristics of VATS (9). Previously, several localization methods have been developed to enhance the accuracy of resection; however, those methods with different localized material or modality exhibited variable complications, advantages, or drawbacks. Arguably, hookwire localization is a safe and effective method; however, its limitation is dislodgement. Reportedly, the nodules near the hilum or scapula are also not suitable for the hookwire localization (10,11). In some studies, the intraoperative ultrasonography was highly operator-dependent and was not suitable for pure ground-glass nodule or lung(s) with emphysema (12,13). Some liquid contrast media, such as lipiodol or barium, have been applied for localization; however, they amplified the radiation exposure to surgeons, increasing the likelihood of errors in pathological results owing to the focal inflammation of specimens (14-17). Furthermore, some studies have provided details of other methods or materials, such as isotope, medical adhesive, methylene blue dye, microcoil, or electromagnetic navigation bronchoscopy (18-23) (Tables 6,7). 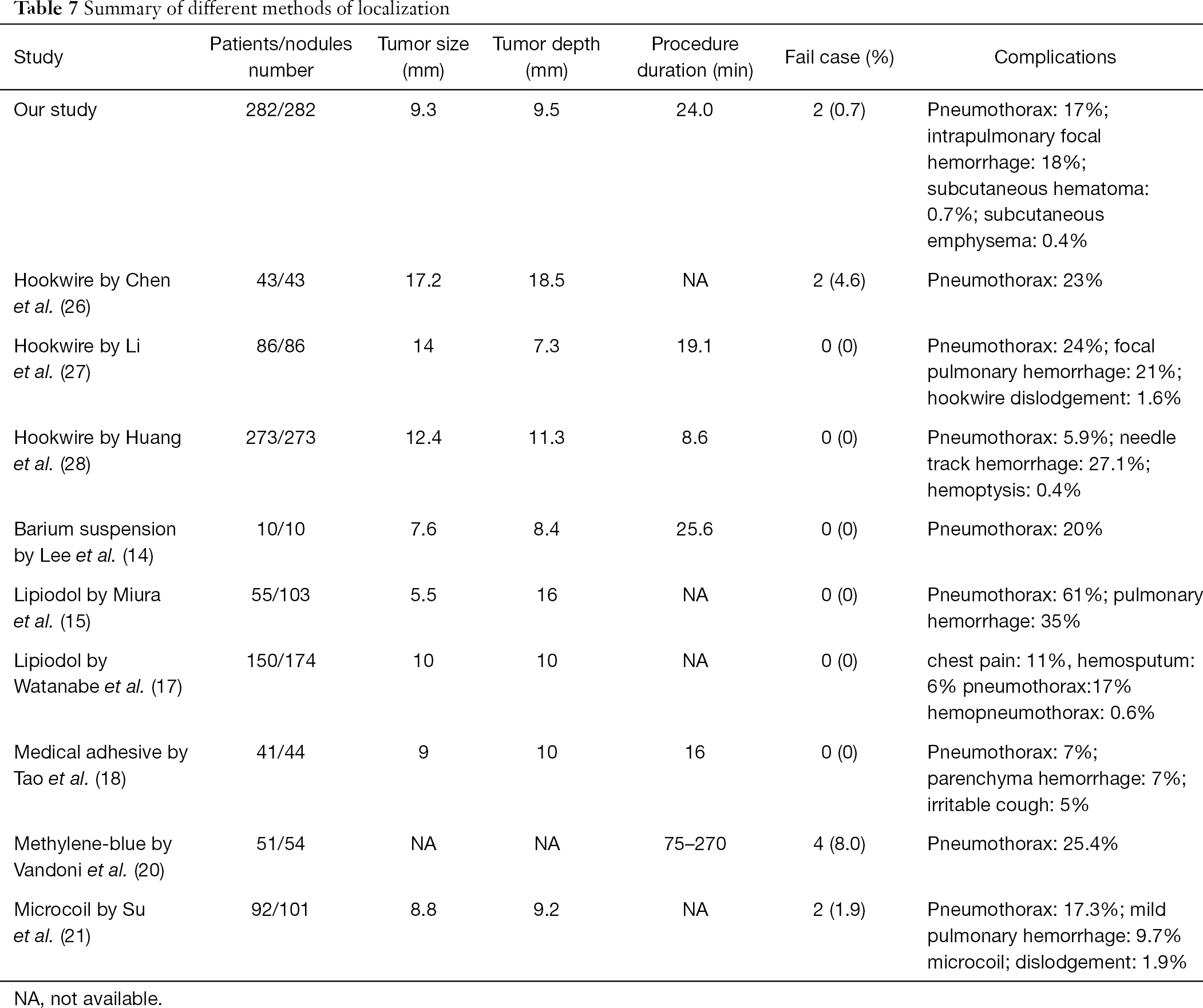 Patent blue V, a synthetic triphenylmethane dye, has been extensively used in sentinel lymph node mapping in patients with malignancy. Haque et al. reported six patients with an allergic reaction, such as hypotension, bronchoconstriction, erythema, urticaria, and angioedema, to patent blue V during sentinel lymph node mapping for breast cancer (29). Likewise, Mertes reported 14 cases of hypersensitivity reaction between 2004 and 2006; 6 patients had cardiovascular collapse (30). In this study, we noted no associated allergic reactions.

Compared with other methods of localization, the advantage of the dye is the simplicity by using a 22-gauge Chiba needle and CT equipment, eliminating any need of receiving additional radiation dose for an operator during the procedure. In fact, multiple nodules localization could also be manipulated by the CT-guided dye localization simultaneously. In our procedure, the common complications were pneumothorax and focal lung hemorrhage; most patients were asymptomatic and only dealing with nasal cannula oxygenation. Few patients needed the insertion of a chest tube to drainage the air. In this study, two patients required insertion of the second Chiba needle because of malposition of the first Chiba needle with moderate pneumothorax. Choosing the small-diameter needle, avoiding transversing the pleura recurrently, and the transfissural route could minimize the risk of pneumothorax or other complications. We did not observe rare complications or an anaphylactic reaction in our patients.

In this study, two cases exhibited nonvisualization or poor identification of the dye during VATS. The first case (Figures 4,5) with mild pneumothorax during the procedure and shallow needle insertion depth was found at the image; this could be attributed to the dislodgement of the needle into the pleural cavity during the dye injection. The injected dye was mixed with the pleural fluid and became invisible to the surgeon during VATS. The second case (Figure 6) had a deeper lung nodule at the image. The localization review revealed that the final site of the dye injection was far away from the subpleural region; the distance between the lung surface and the needle tip was >1 cm. Perhaps, the poor dye visualization at the lung surface was caused by the remote distance; the dye was injected too deep to be viewed from the lung surface. Other causes of failed dye localization might include moderate or severe pneumothorax or uncooperative patients, making the lesion unapproachable or prolong the procedure duration during the localization. 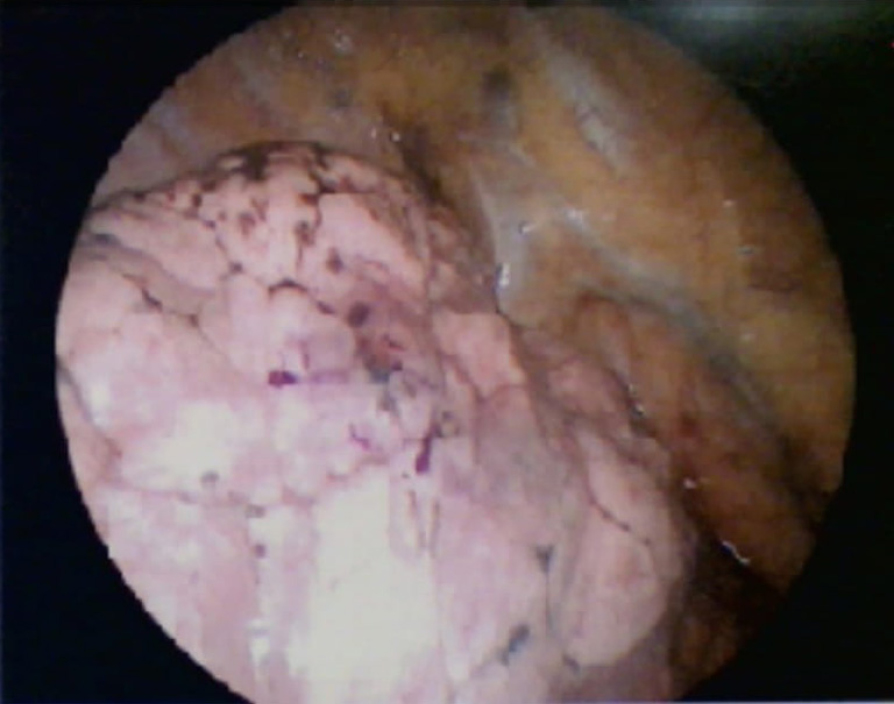 Figure 5 The thoracoscopic view of the same patient from Figure 4. No visible dye at the lung surface. The excision of the lung nodule was performed under the finger palpation of the surgeon. The final pathology revealed adenocarcinoma. 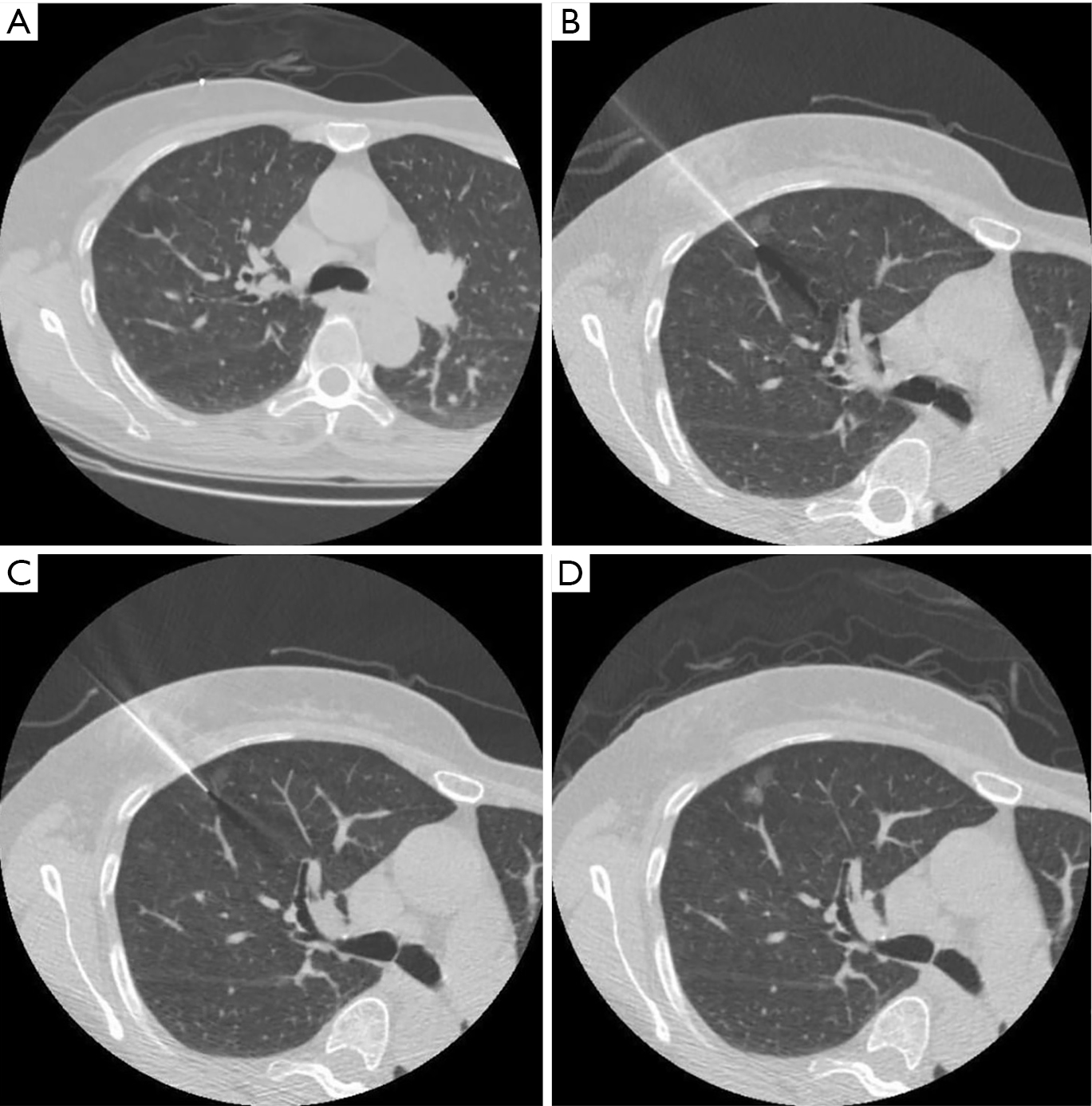 Figure 6 A 64-year-old female with a small pure ground-glass nodule at the right upper lobe of the lung. (A) A ground-glass nodule at the right upper lobe of the lung; (B) the Chiba needle is inserted adjacent to the target nodule with dye injection; (C) pulling back the Chiba needle with dye injection. The distance of the needle transversing the lung is 12 mm in depth; (D) the final CT scan revealed marked dye surrounding the target nodule but not at the subpleural region. The surgical report showed no obvious dye identification in the right pleural space during VATS. However, wedge resection was performed according to the presumed location of the target lesion from the anatomy. The pathology of the specimen showed adenocarcinoma. CT, computed tomography; VATS, video-assisted thoracoscopic surgery.

This study has several limitations. First, it is a retrospective study conducted in a single center. Second, other variable factors could have affected the outcome of patients, including different surgical methods or underlying medical condition of patients. Third, we found few cases with other localization techniques at our institution, making it challenging to compare the pros and cons of different localization methods in this study. Finally, the study only reviewed patients with a single lung nodule. Hence, comprehensive studies with larger sample size are warranted.

Ethical Statement: This study was performed in accordance with the ethical standards detailed in the Declaration of Helsinki. All patients have provided written informed consent.