Recently developed fluorescence-based optical imaging methods are being used for navigation in various fields of surgery (1,2). Indocyanine green (ICG) is used for evaluation of liver function, cardiac output, and so on (3). The emission of fluorescence by ICG can be detected even within deeply located structures because it is transmitted through tissue (4,5); therefore, ICG-based optical imaging can provide minimally invasive imaging of vessels and lymphatic ducts deep inside organs, and real-time imaging during surgery. ICG-based imaging has been recently used in the field of thoracic surgery for lung segmentectomy.

Since the 1960’s, the standard procedure for resectable non-small cell lung cancer (NSCLC) has been lobectomy with systematic lymph node dissection and not segmentectomy (6). A current meta-analysis, however, elucidated that segmentectomy produced survival rates similar to those obtained by lobectomy for patients with stage I NSCLC (7). Moreover, segmentectomy preserves whole lung function better than lobectomy, because the lobe is not only preserved, but the function of the ipsilateral non-operated lobe(s) is improved (8). Although the importance of segmentectomy for stage I NSCLC has increased, segmentectomy remains a more difficult procedure than wedge resection or lobectomy. In addition, preoperative planning and decision making for segmentectomy vary among surgeons. Above all, the accurate intraoperative identification of the target intersegmental plane is essential to the procedure, especially with regard to video-assisted thoracoscopic surgery (VATS) segmentectomy. Several intraoperative methods for identifying the intersegmental plane have been reported (9-12).

In 2009, an experimental study conducted on pigs showed the feasibility of near-infrared (NIR) imaging and ICG fluorescence (ICGF) for identifying intersegmental planes (13). Subsequently, the usefulness of this approach for human patients was reported (14,15). This approach evaluates the blood supply to the lungs, allows arterial segmentation, and avoids the need for reinflating the lung. It has proved suitable for emphysematous lungs and the use of a VATS procedure instead of conventional bronchial segmentation.

In 2017, we reported our initial results from VATS segmentectomies under ICGF-based navigation (16), and the present study further reports the current patient outcomes from those procedures.

This study was approved by the Institutional Review Board of Clinical Research (No. 2010-1055) at the Cancer Institute Hospital, and written informed consent was obtained from each patient. From January 2013 to December 2017, 149 patients underwent VATS segmentectomy under ICGF-based navigation at our institute.

ICG is a hydrophilic tricarbocyanine dye with a molecular mass of 776 Da, which rapidly binds to plasma proteins in the body. Previous studies have reported that ICG was well tolerated, with no immediate or short-term complications related to its administration. When NIR light (805 nm) is absorbed by ICG in plasma, ICG emits fluorescence with a wavelength of 830 nm that is visible during NIR thoracoscopy. ICG administered after ligation of segmental arteries allows visualization of segmental boundaries during NIR thoracoscopy. We generally use a NIR thoracoscopy system (D-Light P system; Karl Storz Endoskope, Japan K.K., Tokyo, Japan) for segmentectomy under ICGF-based navigation. This scope was 10 mm in diameter with a 30-degree rigid scope. The imaging mode could be changed instantly between white light and ICGF by a foot-operated switch.

Although the definition of VATS in Japan varies, for this study it was defined as an operation performed entirely through 4 small incisions that measured 30, 15, 7, and 7 mm, without rib spreading, and that used video-monitor visualization only. After the dominant pulmonary arteries and segmental bronchus were divided, ICG (0.25 mg/kg) was injected into a peripheral vein. Under NIR visualization, the resulting line of ICGF was marked by electrocautery, and lung parenchyma was divided along the line by electrocautery or endoscopic staples. Generally, we tried to obtain a surgical margin larger than the size of the tumor (Figures 1-4). 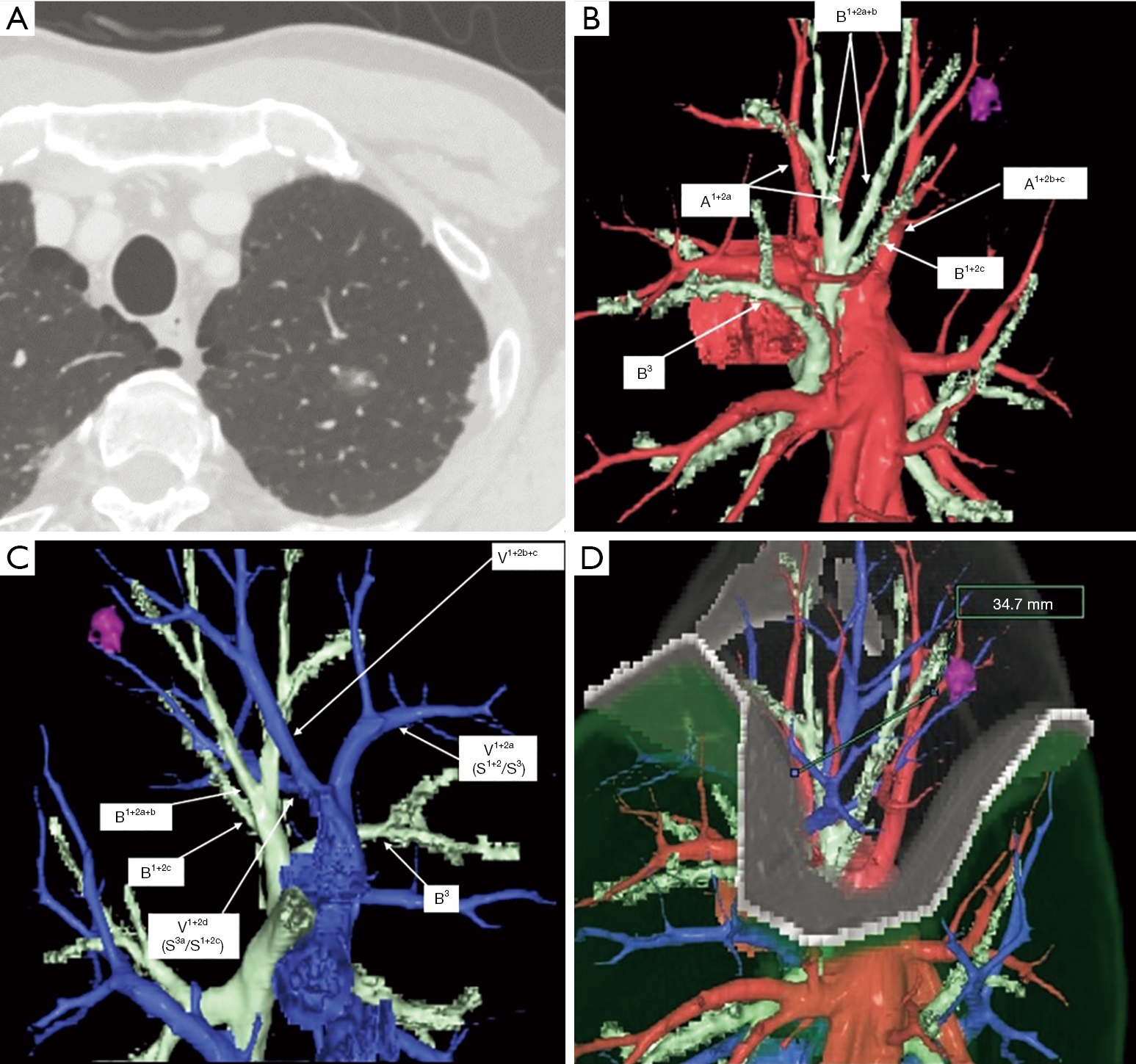 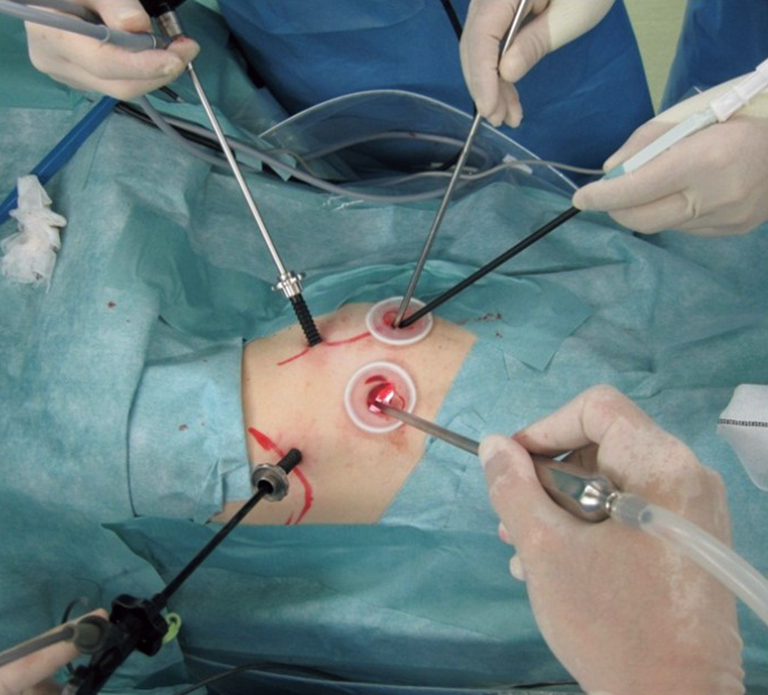 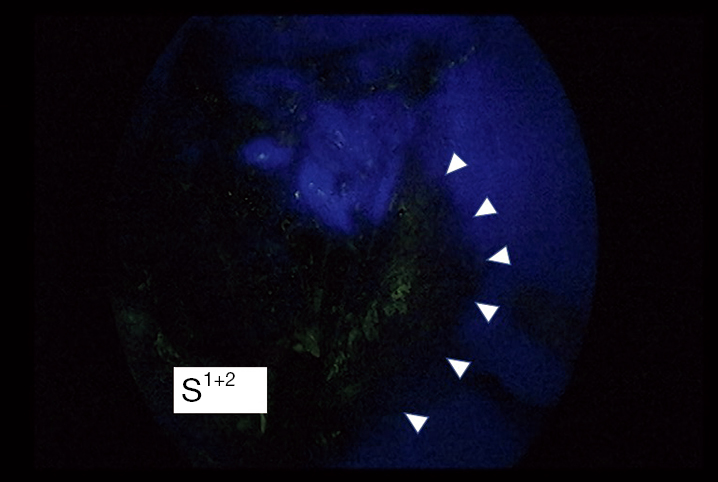 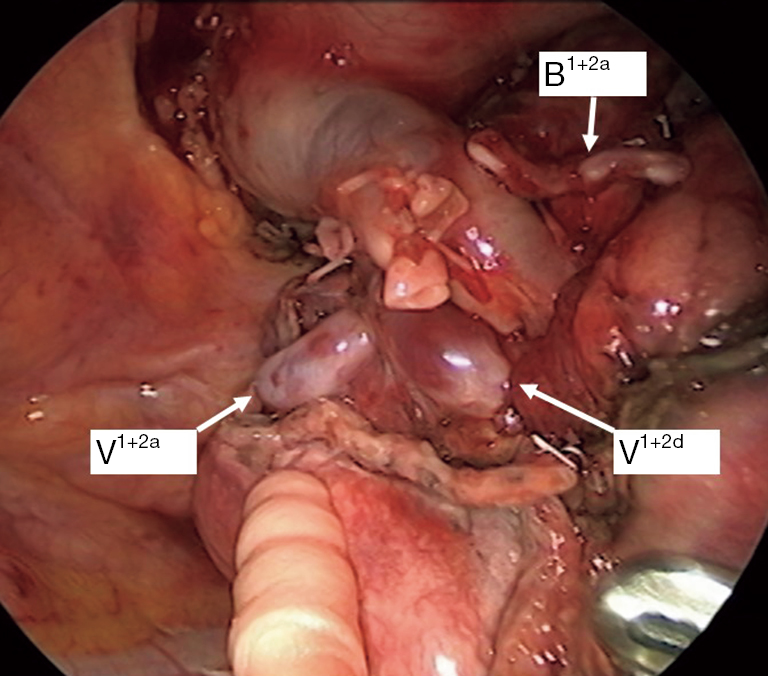 Statistical analysis was performed by EZR (Saitama Medical Center, Jichi Medical University, Saitama, Japan), which is a graphical user interface for R (The R Foundation for Statistical Computing, Vienna, Austria). Specifically, EZR is a modified version of R commander, which was designed with additional statistical functions that are frequently used in biostatistics.

No ICG-related intraoperative or postoperative adverse events were observed. ICG-based identification of the target intersegmental plane was possible in 146 (98%) patients. The median duration of chest drainage was 1 day (range, 1–23 days), and the median postoperative hospital stay was 5 days, (range, 5–36 days). All patients were discharged without major complications; although 1 patient with primary lung cancer was readmitted and died of acute postoperative exacerbation of interstitial pneumonia.

The surgical margin was negative for malignancy in all patients; however, in 7 patients (4.7%), the width of the tumor margin was less than the size of the tumor. In a case of metastatic lung tumor case, 1 (0.7%) localized recurrence at the resected site occurred 12 months after the surgery. Radiotherapy was used to treat this patient. 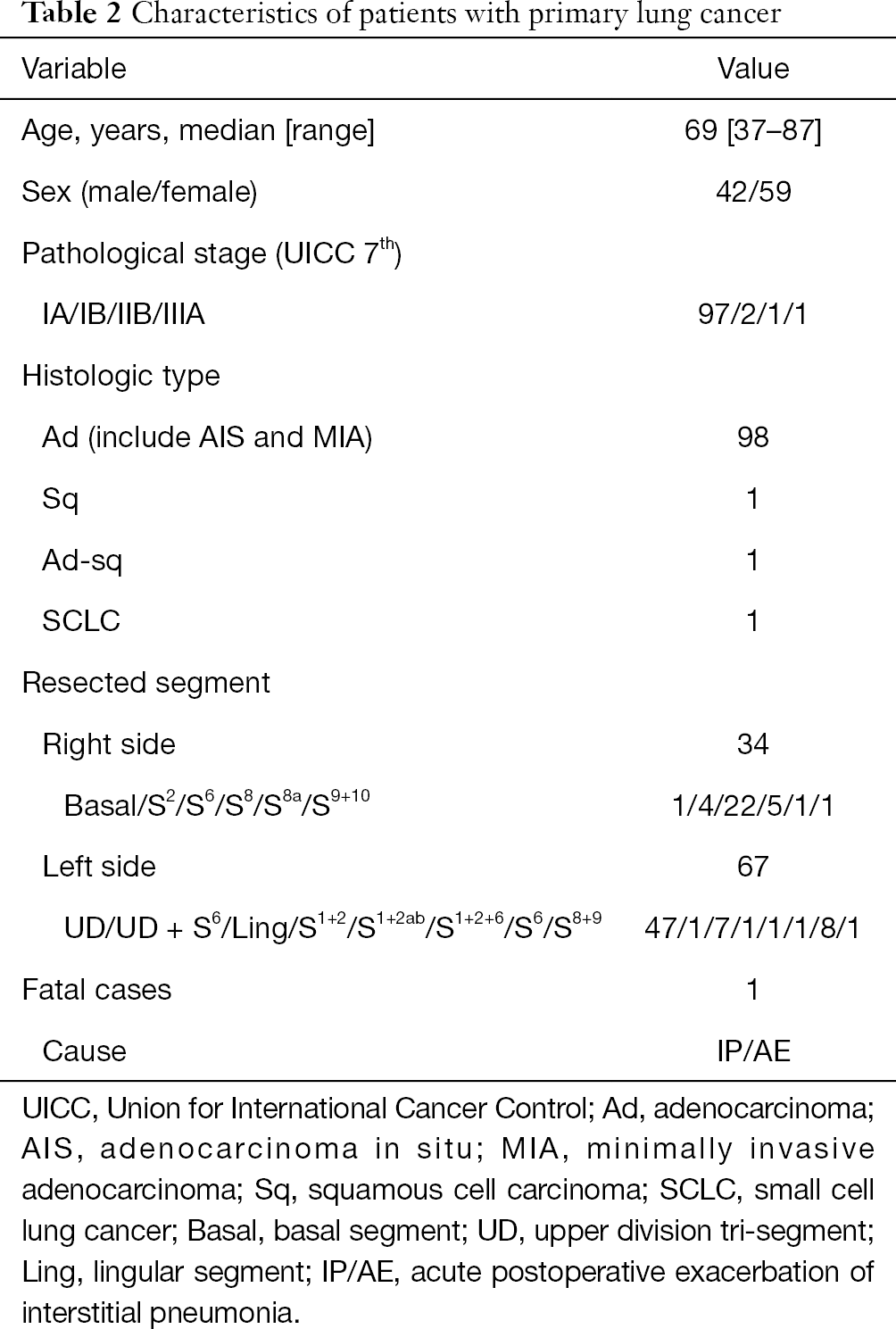 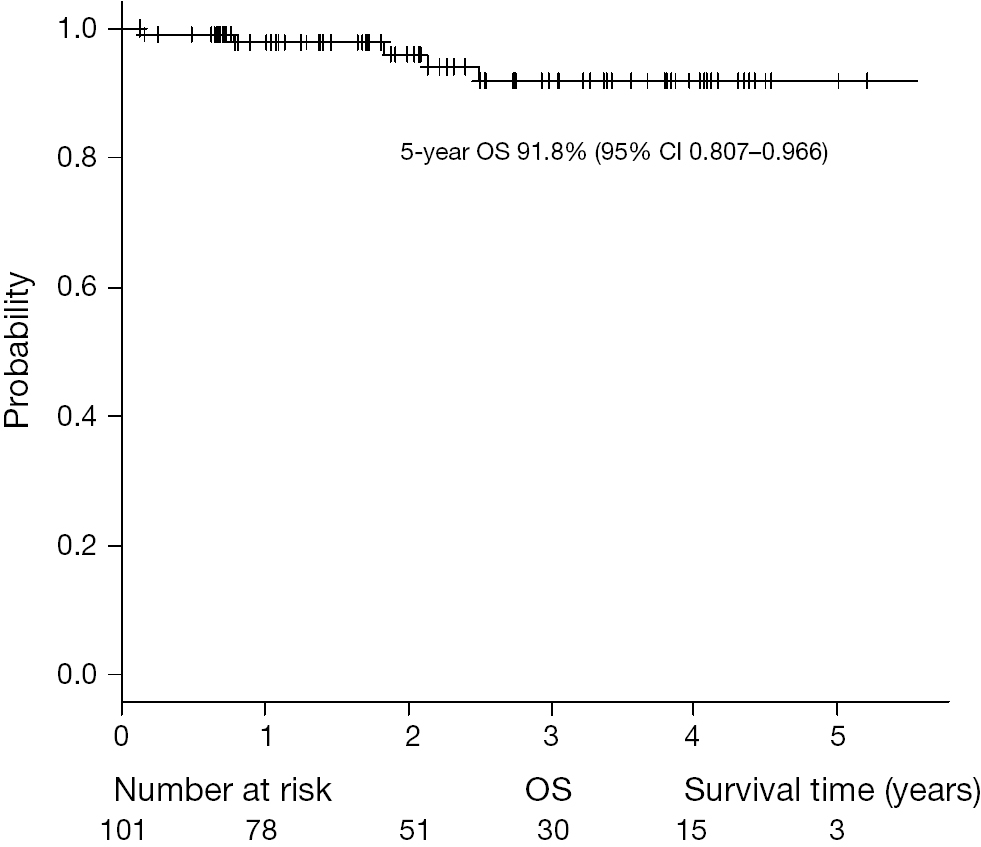 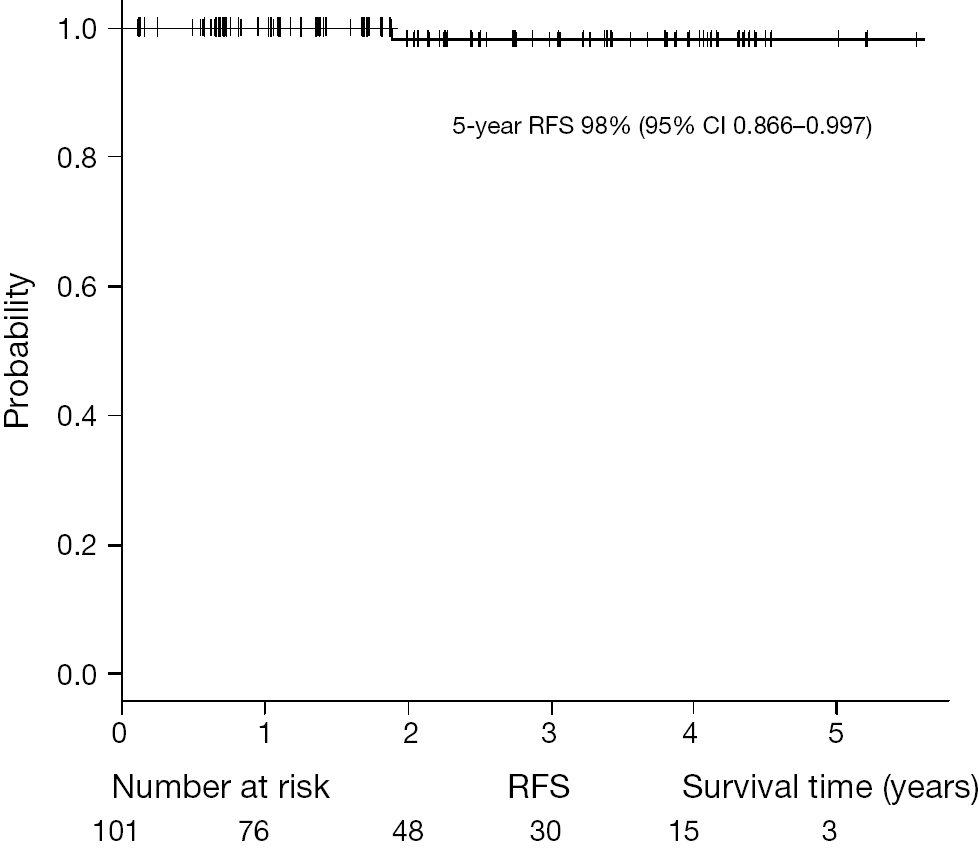 This study investigated the feasibility and efficacy of the surgical procedures, strategies, and outcomes of VATS segmentectomy performed under ICGF-based navigation in our institute. To the best of our knowledge, our series is comprised of the largest number of patients. Previous studies on segmentectomy under ICGF-based navigation have shown efficacy for this guidance method. The intersegmental line could be identified and demarcated for 85–100% of patients (14,17), and no adverse events related to ICG administration were reported. In this study, we also identified the target intersegmental line for 98% of patients, despite the use of low-dose ICG; and did not observe related adverse events. In addition, an excellent therapeutic outcome for patients of primary lung cancer was shown in this study. Although the follow-up period was short, the 5-year OS and RFS rates were excellent. Moreover, no local recurrence at the resected site was worthy of special mention. Our results indicate that VATS segmentectomy under ICGF navigation for our patient population was acceptable. However, as we previously reported, several limitations of this method should be acknowledged (16). First, ICG may rapidly be washed out, leading to the loss of staining. Second, in difficult settings such as severe anthracosis of the lung, visualization of an obvious contour can be problematic because of hypovascularity of peripheral lung. Third, ICGF can spread into target segments, resulting in reduced contrast. Fourth, although ICGF could be observed on the surface of the lung, it could not be seen in the ongoing dissection plane. Fifth, electrocautery to delineate the demarcation line must be performed carefully because the background is dark in the ICGF mode. And last, the NIR thoracoscopy system is expensive, and the equipment is not conventional. Some companies have now introduced NIR thoracoscopy systems that merge visible light images with the fluorescent images on the display monitor (Figure 7). Further technological developments may resolve some of the shortcomings.

In summary, ICGF-based navigation for NIR VATS segmentectomy for patients with lung cancer is feasible and effective. ICGF-based navigation can provide a clear surgical field by allowing maintenance of the deflated state of the lung and can achieve a high rate of accurate identification of the intersegmental line. The most important issue with segmentectomy, however, is how to obtain an adequate surgical margin. To tackle this issue, we should do more to identify patients appropriate for the procedure, and to select the most advantageous surgical procedure for those patients, to avoid local recurrence after segmentectomy. Selected patients who undergo segmentectomy should survive without recurrence using surgical treatment alone. Currently, two prospective randomized, multicenter phase III trials are being conducted by the Cancer and Leukemia Group B (CALGB 140503) (18) and the Japan Clinical Oncology Group (JCOG 0802) (19) to establish the effectiveness of intentional sublobar resections for small (2 cm) peripheral tumors. We look forward to the results of these studies, which should help to address this issue.

Ethical Statement: This study was approved by the Institutional Review Board of Clinical Research (No. 2010-1055) at the Cancer Institute Hospital, and written informed consent was obtained from each patient.