Laparoscopic pancreaticoduodenectomy with major venous resection and reconstruction with repassed round ligament: a case report

A 62-year-old female patient complaining of upper abdominal pain for one month admitted in our institution. She had no comorbid illness or cholangitis. Her BMI was 23.1 kg/m2, total serum bilirubin was 19.8 umol/L, and direct bilirubin was 6.3 mg/dL. The carbohydrate antigen 19-9 was 9.07 U/mL, and carcinoembryonic antigen was 4.18 ng/mL. The contrast-enhanced computed tomography showed a 2.8 cm × 3.0 cm low-density mass in the head of the pancreas with superior mesenteric vein/portal vein (SMV/PV) involvement and without artery involvement (Figure 1A). Computed tomography angiography (CTA) showed that the length of venous involvement was 4 cm (Figure 1B).

Figure 1 Preoperative CT images of patients. (A) Contrast-enhanced CT showing the mass in the pancreatic head involved the superior mesenteric vein. (B) CT angiography showing the length of venous involving was approximate 4 cm.

The patient was placed in the supine position with legs apart. Pneumoperitoneum was created using a Veress needle and maintained in 13 mmHg during the operation. Five trocars were used. One 10-mm umbilical trocar for the laparoscope port, two 12-mm trocars located at the right and left flank of rectus abdominis, and one 12-mm trocar and one 5-mm trocar distributed at the left and right midclavicular. The operation began with full exploration of the whole abdominal cavity. The great omentum was dissected with ultrasonic scalpel. Then we fully took down the hepatic flexure of the colon and the mesentery of the transverse colon to expose the head of pancreas and the horizontal part of the duodenum. A wide Kocher maneuver was performed to ensure that the tumor did not involve the inferior cava, left renal vein, celiac trunk, aorta, and superior mesenteric artery (SMA). SMV was recognized at the lower edge of the pancreas and hanged with a rubber band. As the anterior wall of SMV was involved by the tumor, we did not create the post-pancreatic tunnel. We removed the No. 8a lymph node and showed the common hepatic artery, gastroduodenal artery and hepatic artery. The gastroduodenal artery was double clipped with hem-o-lock and transected with scissors. We transected the duodenum approximate 2 cm away from pylorus with endoscopic liner stapler. Then we dissected the gallbladder and transected the common hepatic duct. The proximal stump of the common hepatic duct was clipped by an endoscopic bull-dog clips to prevent bile juice pollution. The PV was identified and hanged with rubber band. The jejunum was transected using the endoscopic stapler at a site 15 cm from the Treitz ligament. We transected the pancreas approximate 1 cm away from pancreatic neck and the main pancreatic duct was identified and transected with scissors. The splenic vein was transected with endoscopic stapler. We retracted the SMV/PV axis along with the pancreatic head to the right and obtained a favorable exposure of the SMA/celiac trunk axis. The right semicircular dissection of all soft connective tissues surrounding the SMA was performed. 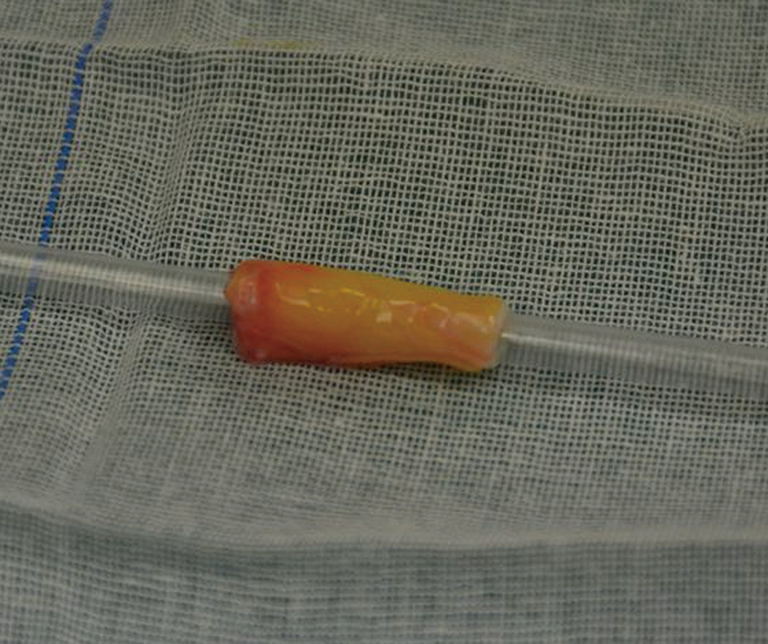 Figure 2 A suction tube was inserted into the round ligament confirm its patency.

The SMV and PV were occluded using laparoscopic bulldog clips and transected with scissor. Vascular reconstruction was performed with 5-0 prolene. We firstly performed anastomosis of SMV with round ligament. The anastomosis started from posterior wall and followed by anterior wall in a continuous suturing. Then we performed anastomosis of PV with round ligament in the same fashion (Figure 3). Blood flow patency was ascertained by intra-operative laparoscopic color Doppler. 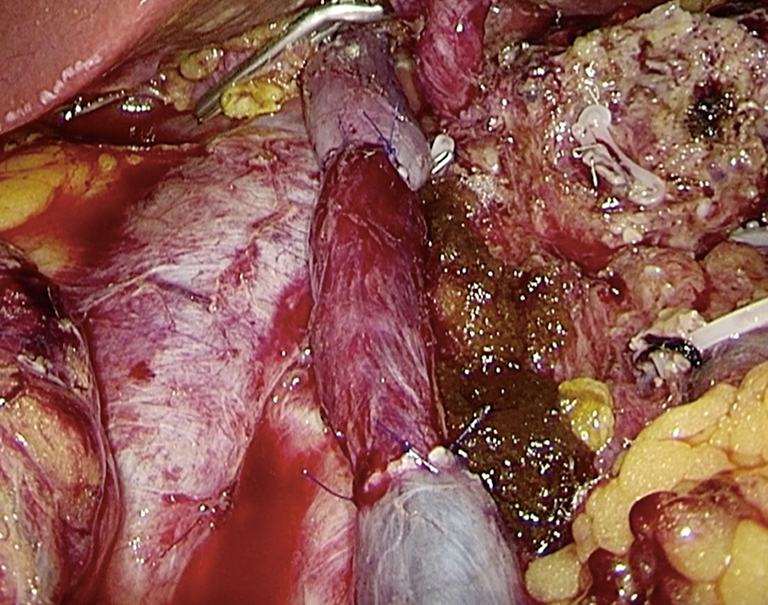 Figure 3 The completion of the venous reconstruction.

The Operative time was 450 min and intra-operative blood loss was 200 mL. The duration of blood occlusion time was 48 min. No blood transfusion was required. The number of lymph node harvested was 17. The specimen was shown in Figure 4. The post-operative pathological examination showed that the pancreatic mass was pancreatic duct adenocarcinoma, and all the margins were negative. The tumor involved the whole layer of the SMV/PV. Post-operatively, the patient received low-molecular heparin therapy (2,500 IU/day for 7 days). We performed CTA for the patient on the post-operative day 5 (Figure 5). The CTA confirmed the patency of the anastomosis of blood vessels. The post-operative period was uneventful. The patient was discharged on postoperative day 15. 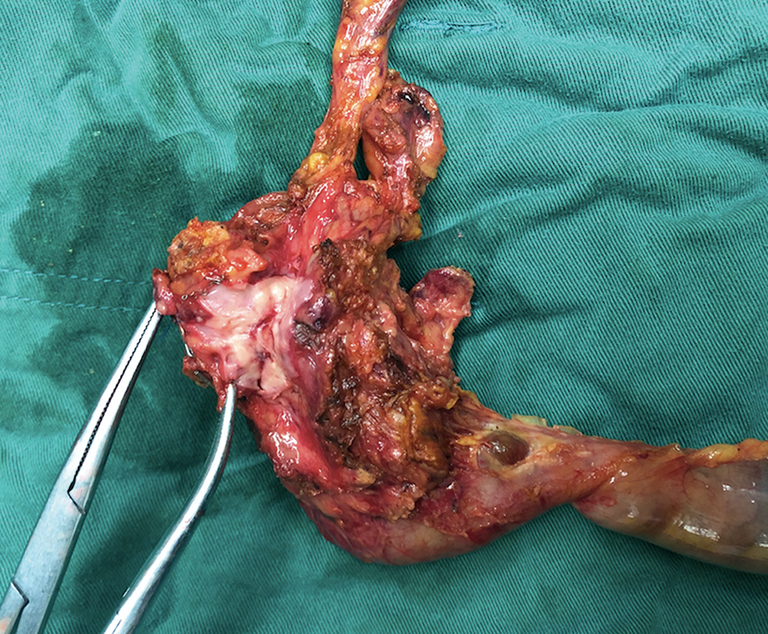 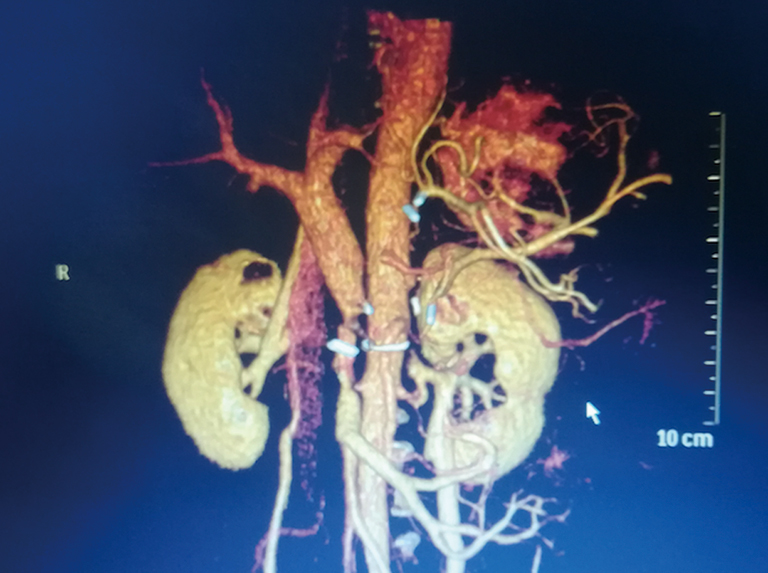 In OPD, venous reconstruction has been performed with end-to-end anastomosis or using various grafts including artificial grafts, autologous veins, and the parietal peritoneum (5). However, the most common graft used in LPD was artificial graft (4,6). LPD was firstly reported by Gagner and Pomp in 1994 (7). Compared with OPD, LPD could provide several advantages, such as lower blood loss, shorter lengths of stay in the intensive care unit or hospital, and fewer complications (8). However, it is technical challenging to perform LPD with major venous resection and reconstruction. Only a few retrospective small series and several case reports were available in the literature. Kendrick et al. reported a case of LPD with venous reconstructed using autologous left renal vein (3). Dokmak reported a case of LPD with venous reconstructed using with the parietal peritoneum (9).

We have performed 35 cases of LPD with major venous resection and reconstruction in our institution. To date, we reported the first case of LPD with major venous resection and reconstruction with repassed round ligament. Takahashi et al. reported eleven patients who underwent venous wedge resection and patch repair using the repermeabilized umbilical vein of the round ligament (10). Compared with autologous veins, a round ligament could be obtained without any further exploration or any greater risk for the patient. Furthermore, a round ligament could be harvested rapidly with no limitation in length. The diameter of repassed round ligament is approximately 1 cm, which is perfect to perform anastomosis with SMV and PV. Compared with artificial graft, long-term therapeutic anticoagulation is not essential and the theoretical risk of infection is very low. The peri-operative and short-term outcomes of this patient were favorable. However, the long-term patency of repassed round ligament required further investigation.

It is safe and feasible to perform LPD with major venous resection and reconstruction with repassed round ligament. Compared with other grafts, round ligament can be harvested rapidly with no limitation in length, and could be obtained without any further exploration or any greater risk for the patient. Long-term therapeutic anticoagulation is not essential for the patients. However, long-term patency of repassed round ligament for venous reconstruction required further investigation.

Funding: This study was funding by National Institutes of Health of China (W2017ZWS07).