The 8th TNM edition for lung cancer: a critical analysis

Compared to the 7th tumor, node and metastasis (TNM) edition for staging of non-small cell lung cancer (NSCLC), the recently launched 8th edition shows further improvement in defining specific subcategories with a different prognosis. Main changes are related to the T and M descriptors and subdivisions for N descriptors are suggested for further analysis (Table 1). In this manuscript several aspects of the 8th edition are highlighted and critically analyzed (Table 2). Suggestions for further analysis and improvement are made which may be incorporated in the 9th TNM edition scheduled for publication in 2024. 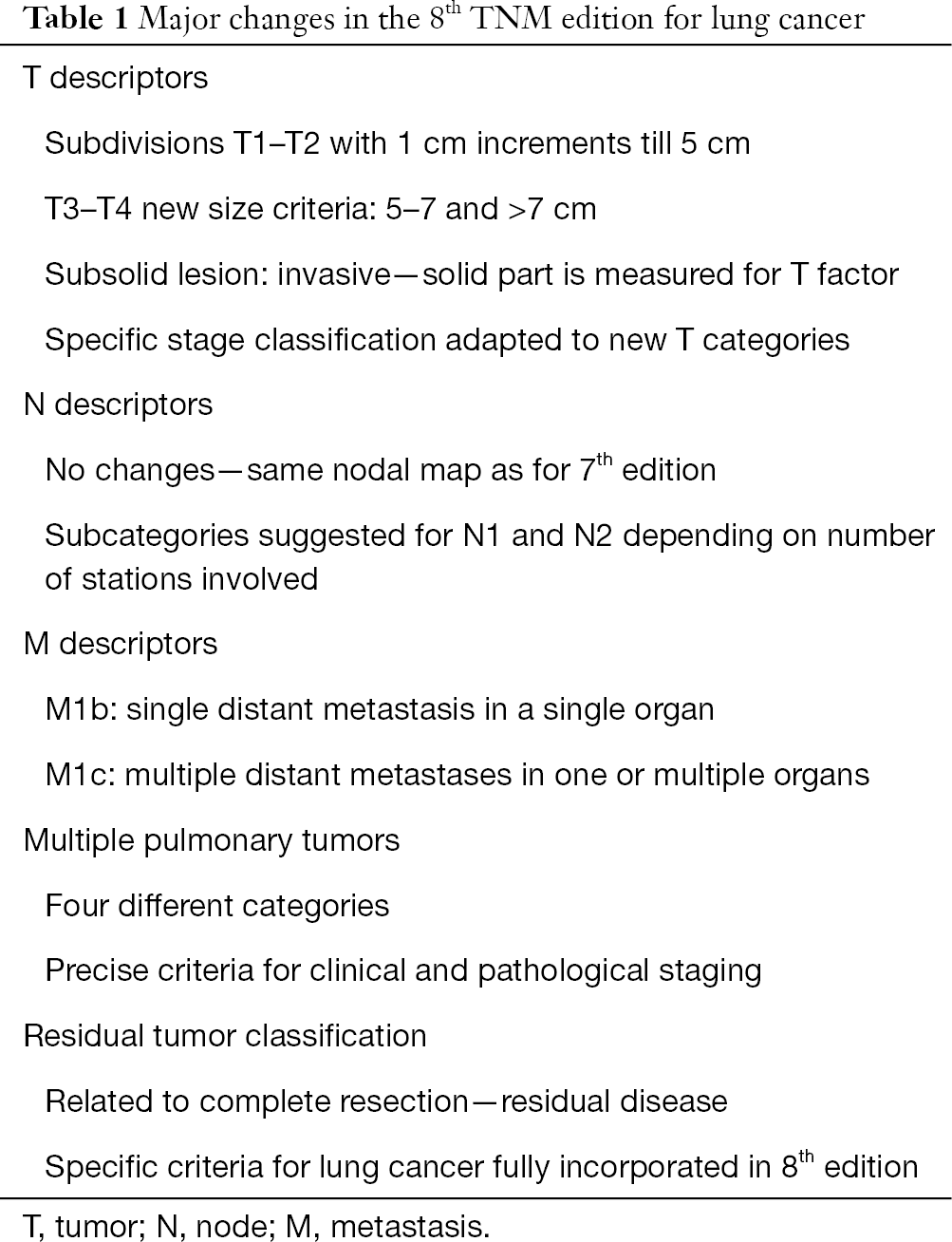 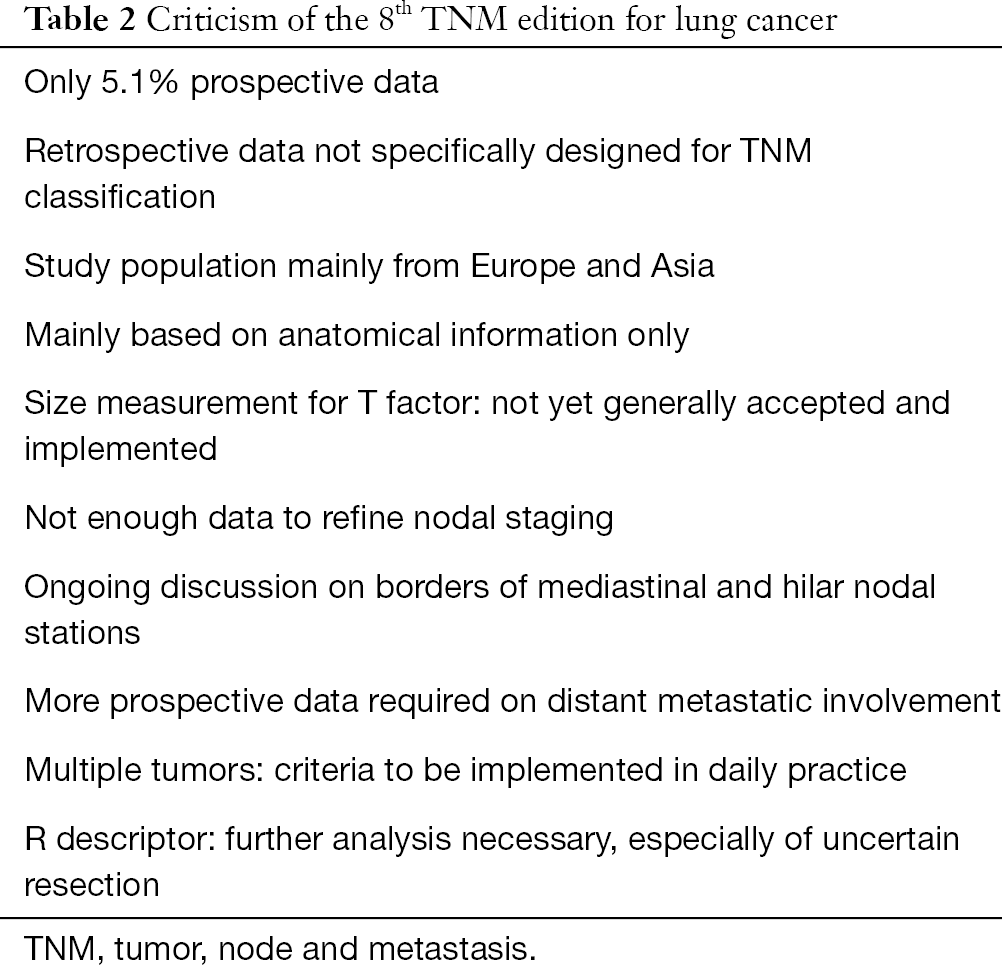 Database used for the 8th edition

Data for the 8th edition were collected by Cancer Research and Biostatistics (CRAB) based in Seattle, Washington, USA, and for the first time also prospective data were included by Electronic Data Capture (EDC) (1). Without any doubt, these prospective data are of better quality allowing a more refined subdivision in prognostic groups. An impressive total of 77,156 patients could be evaluated but unfortunately, only 3,905 (5.1%) were prospectively entered. Moreover, most retrospective data were not specifically designed for TNM classification.

In contrast to previous databases only a minority of the data come from North America which may introduce a bias towards survival in European and Asian populations. On the other hand, this provides a clear opportunity to validate the survival data with an independent cohort of North American patients by using the National Cancer Database (NCDB) or Surveillance, Epidemiology and End Results (SEER) database.

Hopefully, for the 9th edition the number of prospectively entered data will further increase and centers all over the world are encouraged to submit data through CRAB in electronic format (EDC).

In the 8th edition major changes were introduced concerning the T component. For the T1 and T2 categories subdivisions with a 1 cm increment were created. T1 still includes tumors until 3 cm with three subcategories T1a, T1b and T1c with cut-off values of 1, 2 and 3 cm, respectively (2). T2 comprises T2a and T2b with tumors till 4 and 5 cm, respectively. T3 now describes tumors between 5 and 7 cm while lung cancers larger than 7 cm are included in the T4 category. The survival curves of these T subdivisions nicely separate; so, these new categories are relevant for daily practice. As more screening programs are implemented worldwide, this is especially valid for smaller nodules, incidentally discovered by computed tomographic (CT) screening, so-called screen-detected nodules (3). Specific stages were created to incorporate the new T divisions (4).

There is an ongoing discussion how to precisely measure tumor size. For the 8th edition it was agreed upon to measure the largest unidimensional size with lung window settings on CT scan (5). In fact, it has been demonstrated that bidimensional, perpendicular measurements and determination of tumor volume as performed in the large NELSON screening trial, provide more reliable data but these are more difficult to apply in routine clinical practice and require specific imaging software (6,7).

For subsolid nodules, suggestive of non-mucinous adenocarcinoma, a major change includes measurement of only the solid part on chest CT scan to determine clinical tumor size as is performed for other tumors as breast cancer (5). This mostly corresponds to the invasive part on pathological examination allowing a radiological—pathological and clinical correlation (8). This is especially important for the new pathological entities of adenocarcinoma, adenocarcinoma in situ (AIS) and minimally invasive adenocarcinoma (MIA) which were defined by a common task force of the International Association for the Study of Lung Cancer (IASLC), American Thoracic Society (ATS) and European Respiratory Society (ERS), and subsequently fully incorporated in the World Health Organization (WHO) 2015 histological classification of tumors of the lung, pleura, thymus and heart (9,10). For part-solid lesions it is also recommended to record the whole tumor size for subsequent analysis and comparison.

It is important that these recommendations are generally applied to avoid a “size bias” when comparing data from different centers, countries and continents.

For the 8th edition the N component did not undergo any general changes although in the 7th one already some suggestions were made for subdivisions of the N1 and N2 descriptors in subcategories according to the number of involved nodal zones which were introduced at that time (11). N1a and N1b comprised patients with invaded single and multiple N1 zones, and N2a and N2b patients with involvement of single and multiple N2 zones, respectively. However, insufficient data were obtained at clinical staging to imply these changes for the 8th edition.

To better stratify the N categories new suggestions are provided in the 8th edition, currently related to involvement of nodal stations and not nodal zones anymore (12). These subdivisions are intended for further analysis and possibly considered for implementation in the 9th edition. N1a, N1b, N2a and N2b describe patients with single or multiple N1 or N2 stations involved, respectively. N2a is further subdivided into N2a1 when a single N2 station is involved without N1 nodes (so-called skip N2 disease), and N2a2 with simultaneous involvement of N1 nodes.

These subcategories mainly relate to pathological examination in patients who underwent a thorough intraoperative lymph node dissection. Initial analysis showed a significant survival difference between these N subdivisions with exception of the N1b and N2a1 subcategories which have a similar prognosis. However, more prospectively collected data are required to confirm these findings.

Regarding the lymph node map no changes are implemented in the 8th edition although there is an ongoing discussion on specific borders of certain lymph node stations, not only between thoracic surgeons and radiologists, but also within the surgical community itself. With changes that were already incorporated in the 7th edition N1 nodes can now be reached by a classical cervical mediastinoscopy necessitating a repeat analysis when considering data from older, historical series. The borders between subcarinal lymph node station 7 and hilar station 10 continue to be a controversial topic as station 7 has become a quite asymmetric station extending more on the right than on the left side. General agreement exists on the oncological midline which is projected on the left lateral border of the trachea from the 7th edition on. This makes sense as the right lung directly drains into the right paratracheal and pretracheal lymph node stations which usually form one large chain. As a consequence, the latter stations are considered ipsilateral nodes for right-sided lung cancers and contralateral nodes for left-sided ones. However, less clear for thoracic surgeons are the borders of the upper paratracheal stations 2 and lower paratracheal stations 4 which are not always easy to determine, especially during mediastinoscopy and minimally invasive thoracic approaches. For this reason Prof. Hisao Asamura, who is the current chair of the IASLC Staging and Prognostic Factors Committee, will develop a detailed lymph node map for use during invasive staging procedures and thoracic surgical interventions (personal communication).

Regarding metastatic involvement in the 8th edition, a revised M1b category was introduced including patients with a single distant metastasis in a single organ. This category has the same prognosis as intrathoracic metastases (M1a category) (13). There are no changes in the specific subcategories of the M1a descriptors because all have the same prognostic value. Finally, the newly created M1c category comprises patients with multiple distant metastases in one or several organs. These patients have a significantly poorer survival compared to the M1a and M1b categories. However, this prognostication results from a limited data set at the present time. It is hoped that for the 9th edition more specific data become available to determine whether the number of distant metastases in one specific organ or multiple organs has prognostic value. Also the specific site has to be looked at; e.g., have brain, bone, adrenal or liver metastases a different prognosis?

Precise classification of patients with multiple tumors remains challenging and for this reason the IASLC created the “Multiple Pulmonary Sites Workgroup” chaired by Frank Detterbeck from Yale University. Four papers are devoted to this particular subject indicating the difficulties for staging multiple lesions (14-17). Four groups are considered based on disease pattern: multiple primary tumors, separate tumor nodules, multiple adenocarcinomas with ground glass opacities (GGO) and lepidic features, and finally, pneumonic type adenocarcinoma. It should be noted that in the new adenocarcinoma classification the confusing term “bronchioloalveolar carcinoma (BAC)” is not used anymore (9).

These new categories are clinically very relevant and hopefully, they will allow a better categorization of patients with multiple tumors. When more data are analyzed when these precise criteria are applied, also including biomarker profiles and mutational analysis, modifications may be implemented for the next edition.

In patients who qualify for surgical resection it has already been demonstrated for a long time that complete resection is a major prognostic factor. However, a precise definition of complete resection is not straightforward. For this reason the IASLC created a subcommittee specifically devoted to this particular task. Proposals were already published in 2005 but, unfortunately, not generally implemented (18). The R classification relates to residual disease and very precise criteria were listed for R0 resection, incomplete R1 resection with microscopic residual disease, and R2 resection with macroscopic residual disease.

There was another subdivision initially called “almost complete resection” which was subsequently changed into “uncertain resection” or Run indicating that probably, a complete resection was achieved but not all criteria were fulfilled. An example includes an incomplete nodal dissection when less than the required three hilar/intrapulmonary nodal stations or less than three mediastinal nodal stations, always including the subcarinal station 7, were removed. This Run category has been officially included in the 8th TNM edition and will be further analyzed in detail for the next edition.

This is important as in daily practice a substantial part of major lung resections have to be considered “uncertain” (19), and they have a deleterious effect on survival (20,21). This implies that further education of thoracic surgeons is necessary to obtain more meaningful data on the R descriptor and adapt specific criteria.

The 8th TNM edition provides several new categories, mainly related to the T and M descriptors. These subdivisions have a different prognosis and are clinically relevant. Further categorization of the N component is suggested. The R categories specific for lung cancer are now officially included in the current edition. As staging is a work in progress, further analysis of prospective data and incorporation of detailed immunohistochemical information, biomarkers and mutational analysis will allow better refinement of prognostic categories. Staging of lung cancer will remain a fascinating subject in the years to come!