The antigens belonging to the ABO blood group are linked to oligosaccharide chains at the surface of the erythrocyte membrane, but also at the surface of many other cell types such as epithelia, endothelia, neurons and platelets (1). The ABO locus is located at 9q34.2 and encodes for three major allelic forms, i.e., A, B, and O, which ultimately combine to generate four major ABO blood group types in humans (i.e., O, A, B and AB). Each of the A and B alleles synthesize two glycosyltransferase enzymes (conventionally known as A and B transferases), which function by catalyzing a final step in the production of these two antigens (2). Unlike these two alleles, the O allele synthesizes an inactive form of glycosyltransferase, which leaves the precursor H antigen unaltered.

Despite being a recessive trait, the O blood group is the most frequent ABO blood type worldwide, with an overall prevalence of 49% in blacks, 44% in Caucasian populations and 43% in Asians (2). This apparent paradox has been tentatively explained by a number of putative evolutionary advantages that the O blood group type may confer to the carries compared to subjects bearing non-O blood groups (1). Since running performance and economy, which have been refined over a period of nearly 2 million years, have been now recognized as major drivers of evolutionary advantage in humans and other animal species (3), we planned a study to investigate whether the ABO blood group type may have an influence on endurance running performance in middle-aged recreational athletes.

The study population consisted of 52 recreational, middle-aged, Caucasian athletes (mean age, 49±13 years; body mass index, 23.4±2.3 kg/m2), regularly engaged in endurance activity (mean training regimen, 257±198 min/week). None of these athletes had acute or chronic diseases at the time of the study, they did not report the intake of drugs before the run and all avoided to perform demanding physical exercise for a period of 48 h before the trial. All athletes voluntarily participated in the scientific event called “Run for Science” (R4S) (4), the full details of which have been described elsewhere (5). Briefly, R4S is a scientific research project endorsed by the University of Verona (Italy) and supported by many other worldwide research organizations, entailing the completion of a 21.1 km (half-marathon) run under competing conditions. The start of the run was officially given at 09:00 a.m. and the route developed on a relatively flat route (i.e., 35 m vertical gain; 1.8% maximal slope). The weather conditions on the day of the event (i.e., April 2, 2017) were as follows: partially cloudy day, temperatures comprised between 14–19 °C and humidity between 50–73%; index of ambient ultraviolet radiation, 0.4–3.1. The athletes were allowed to drink ad libitum during the run, but abstained ingesting food until crossing the finishing line. The ABO blood type status of the participants was provided by the Service of Transfusion Medicine of the University Hospital of Verona (Italy).

The potential associations among physiological variables and running time was tested with univariate analysis (Spearman’s correlation). Multiple linear regression analysis with logarithmic transformation of data was then used for establishing the potential associations between blood group types and running time, which was entered as a dependent variable. More specifically, the physiological variables that were found to be significantly associated with running time in univariate analysis (i.e., P<0.05) were entered into the model as independent variables along with the ABO blood group. The ABO blood group was entered as a dichotomous variable (i.e., O and non-O blood groups). The statistical analysis was performed using Analyse-it (Analyse-it Software Ltd, Leeds, UK). Before being enrolled in the study, all the volunteers provided a written consent. The study has been approved by the local Ethical Committee (Department of Neurological, Neuropsychological, Morphological and Movement Sciences, University of Verona) and was performed in accordance with the Declaration of Helsinki. 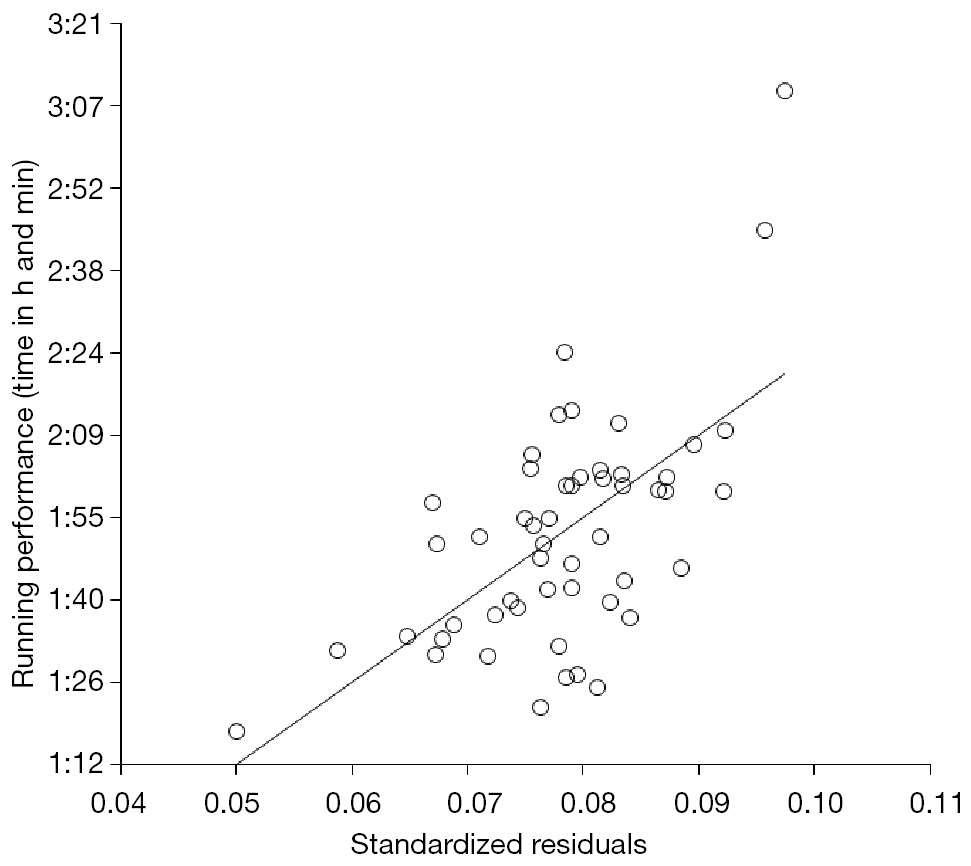 The physiological function of ABO blood group in humans is still a mystery. Despite some hypotheses have been made, no definitive evidence about a putative biological role is available. After over a century of research, it is now clear that having one specific blood group type may carry important consequences on health and wellbeing (2).

Despite being a recessive trait, some good reasons may be brought to justify the larger prevalence of O blood group in humans (2). One reasonable explanation is the protection that this blood group may exert against the risk of developing some of the most frequent human pathologies (6), thus including cancer (7), cardiovascular disease (8), diabetes (9) and venous thrombosis (10). The recent evidence that women with non-O blood groups are at increased risk of pre-eclampsia brings additional support to the evolutionary advantages of having O blood group type (11). Interestingly, Cvjeticanin and Marinkovic observed that the frequency of the O blood type was high (72.2%) in elite water polo players, whereas the frequencies of the A and B blood types were low and AB was absent (12).

Besides these observations, the results of our investigation pave the way to another fascinating hypothesis, which was not been formally tested before because no previous studies have investigated the relationship between endurance performance and ABO blood group types to the best of our knowledge. The evidence emerged from our study that individuals with O blood groups have better performance in endurance running (i.e., approximately 10% better than subjects carrying other blood groups) may evoke another evolutionary advantage that the O blood group may confer to humans. More specifically, a deep analysis of the structural and physiological features characterizing endurance running ability has recently contributed to unmask many aspects of the genus Homo, which would ultimately confer more sustained endurance running capability compared to other primates (13). These aspects especially include long legs with tendons attaching short muscle fibers to the bones, a typical plantar arch of the feet, short toes, specific muscles conformation, anthropomorphic alterations of hips and shoulders, sweat glands, reduced hair mass, mouth breathing and a body suited for a more efficient heat dissipation (13). It is hence now undeniable that improved performance in endurance running has played an essential role for early mankind in capturing food (i.e., persistence hunting), reaching carcasses before other vertebrate scavengers, and even making warriors more likely to survive in the battlefield (3,14). Throughout human history, therefore, having O blood group type may have conferred another survival benefit to the carrier, extending over the reproductive period.

The results of our study show that recreational athletes with O blood group have better endurance performance in running a 21.2 km distance compared to those with non-O blood group types. This finding may hence provide additional support to the putative evolutionary advantages of carrying the O blood group type.

Funding: F Sanchis-Gomar is supported by a post-doctoral contract (APOSTD/2016/140) granted by the Regional Ministry of Education, Research, Culture and Sport (Valencia).

Ethical Statement: The study has been approved by the local Ethical Committee (Department of Neurological, Neuropsychological, Morphological and Movement Sciences, University of Verona) and all the volunteers provided a written consent.